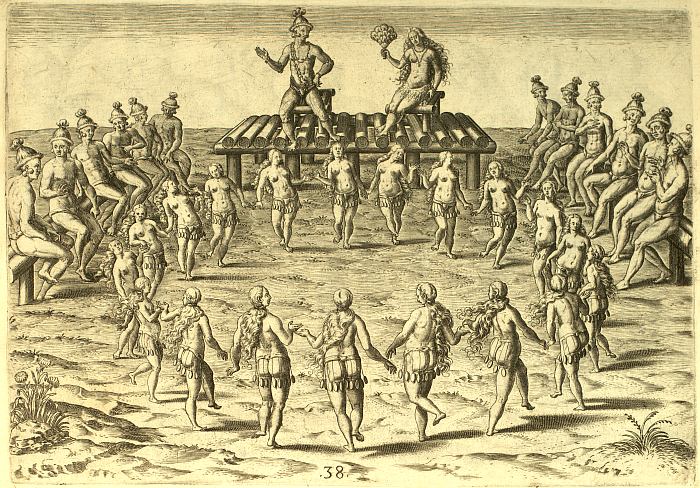 Solemnities at the reception of the queen by the king.

With this display the queen is brought to the king in a place arranged for the purpose, where a good-sized platform is built up of round logs, having on either side a long bench where the chief men are seated. The king sits on the platform on the right-hand side. The queen, who is placed on the left, is congratulated by him on her accession, and told why he chose her for his first wife. She, with a certain modest majesty, and holding her fan in her hand, answers with as good a grace as she can. Then the young women form a circle without joining hands, and with a costume differing from the usual one ; for their hair is tied at the back of the neck, and then left to flow over the shoulders and back ; and they wear a broad girdle below the navel, having in front something like a purse, which hangs down so as to cover their nudity. To the rest of this girdle are hung ovals of gold and silver, coming down upon the thighs, so as to tinkle when they dance, while at the same time they chant the praises of the king and queen. In this dance they all raise and lower their hands together. All the men and women have the ends of their ears pierced, and pass through them small oblong fish-bladders, which when inflated shine like pearls, and which, being dyed red, look like a light-colored carbuncle. It is wonderful that men so savage should be capable of such tasteful inventions.” Narrative of Le Moyne, Jacques Le Moyne