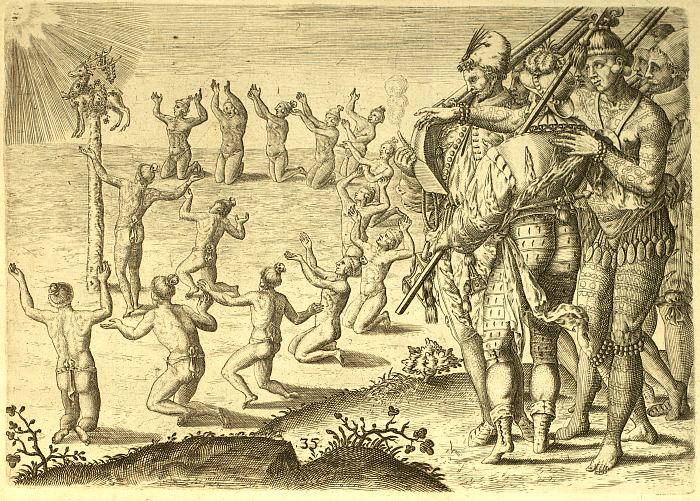 Solemnities at consecrating the skin of a stag tp the sun.

The subjects of the chief Outina were accustomed every year, a little before their spring, that is, in the end of February, to take the skin of the largest stag they could get, keeping the horns on it ; to stuff it full of all the choicest sorts of roots that grow among them, and to hang long wreaths or garlands of the best fruits on the horns, neck, and other parts of the body. Thus decorated, they carried it, with music and songs, to a very large and splendid level space, where they set it up on a very high tree, with the head and breast toward the sunrise. They then offered prayers to the sun, that he would cause to grow on their lands good things such as those offered him. The chief, with his sorcerer, stands nearest the tree, and offers the prayer ; the common people, placed at a distance, make responses. Then the chief and all the rest, saluting the sun, depart, leaving the deer’s hide there until the next year. This ceremony they repeat annually.” Narrative of Le Moyne, Jacques Le Moyne