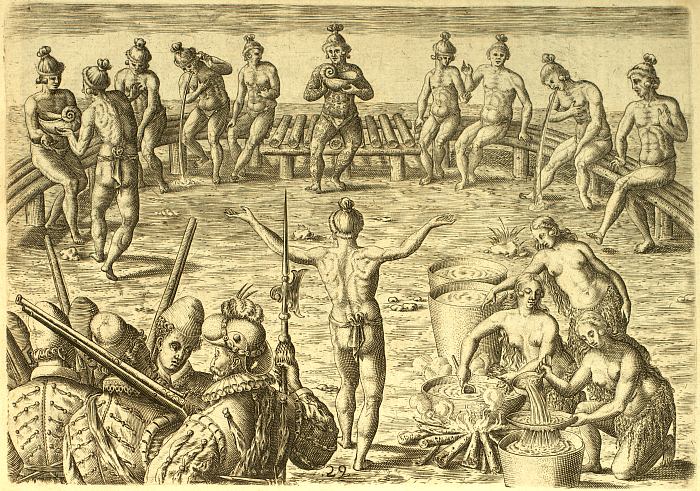 Proceedings of the Floridians in deliberating on important affairs.

The chief and his nobles are accustomed during certain days of the year to meet early every morning for this express purpose in a public place, in which a long bench is constructed, having at the middle of it a projecting part laid with nine round trunks of trees, for the chiefs seat. On this he sits by himself, for distinction’s sake ; and here the rest come to salute him, one at a time, the oldest first, by lifting both hands twice to the height of the head, and saying, ” Ha, he, ya, ha, ha.” To this the rest answer, “Ha, ha.” Each, as he completes his salutation, takes his seat on the bench. If any question of importance is to be discussed, the chief calls upon his laUas (that is, his priests) and upon the elders, one at a time, to deliver their opinions. They decide upon nothing until they have held a number of councils over it, and they deliberate very sagely before deciding.

Meanwhile the chief orders the women to boil some casina ; which is a drink prepared from the leaves of a certain root, and which they afterwards pass through a strainer. The chief and his councillors being now seated in their places, one stands before him, and, spreading forth his hands wide open, asks a blessing upon the chief and the others who are to drink. Then the cupbearer brings the hot drink in a capacious shell, first to the chief, and then, as the chief directs, to the rest in their order, in the same shell. They esteem this drink so highly, that no one is allowed to drink it in council unless he has proved himself a brave warrior. Moreover, this drink has the quality of at once throwing into a sweat whoever drinks it. On this account those who cannot keep it down, but whose stomachs reject it, are not intrusted with any difficult commission, or any military responsibility, being considered unfit, for they often have to go three or four days without food ; but one who can drink this liquor can go for twenty-four hours afterwards without eating or drinking. In military expeditions, also, the only supplies which the hermaphrodites carry consist of gourd bottles or wooden vessels full of this drink. It strengthens and nourishes the body, and yet does not fly to the head ; as we have observed on occasion of these feasts of theirs.” Narrative of Le Moyne, Jacques Le Moyne