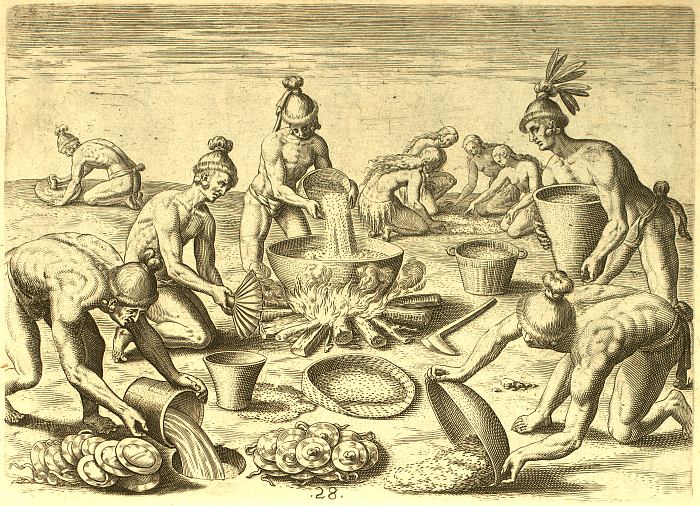 Preparations for a feast.

At the time of year when they are in the habit of feasting each other, they employ cooks, who are chosen on purpose for the business. These, first of all, take a great round earthen vessel (which they know how to make and to burn so that water can be boiled in it as well as in our kettles), and place it over a large wood-fire, which one of them drives with a fan very effectively, holding it in the hand. The head cook now puts the things to be cooked into the great pot; others put water for washing into a hole in the ground ; another brings water in a utensil that serves for a bucket ; another pounds on a stone the aromatics that are to be used for seasoning ; while the women are picking over or preparing the viands. Although they have great festivities, after their manner, yet they are very temperate in eating, and, in consequence, they live to a great age ; for one of their inferior chiefs affirmed to me that he was three hundred years old, and that his father, whom he pointed out to me, was fifty years older; indeed, this last personage, I confess, looked like nothing but the bones of a man covered with a skin. Such facts might well make us Christians ashamed, who are so immoderate in indulgence both in eating and drinking, who shorten our own lives thereby, and who richly deserve to be put under the authority of these savages and of brute beasts, to be taught sobriety.” Narrative of Le Moyne, Jacques Le Moyne