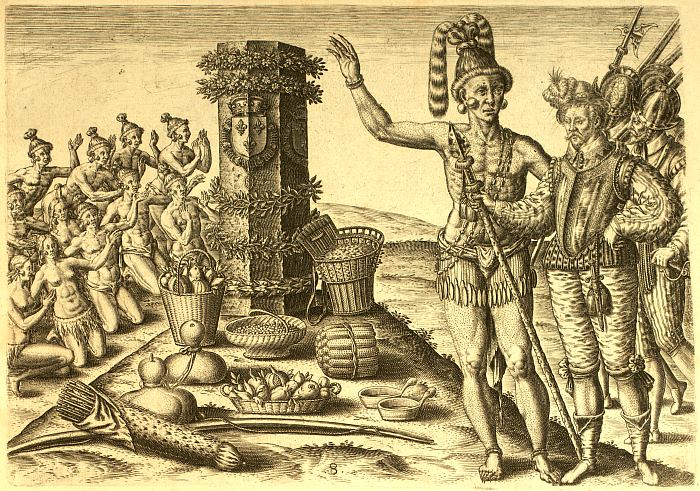 On the first French voyage to Florida under Captain Jean Ribault, a stone monument was erected on the St. Johns River near Jacksonville, Florida to claim the territory for France:

“…the following day Captain Ribault erected a column of hard stone on the banks of this river, not far from the mouth of the river and on a little sandy knoll. The coat of arms of France was carved upon it. This done, he embarked again to continue the survey of the northern coast as he had planned.” Three Voyages, Renee Laudonniere

After arriving back in the New World and landing thirty leagues south of the St. Johns (which they called the River of May), Laudonniere departed this location and returned to where Ribault had constructed the monument. At this time the native Timucua Indians held the stone marker in high regard:

“When the French landed in Florida on their second voyage under Laudonniire, that leader went on shore with five and twenty arquebusiers, after obtaining a safe-conduct from the Indians, who had gathered in crowds to see them. The chief Athore, who lived four or five miles from the seashore, also came ; and after an exchange of presents had been made, accompanied by demonstrations of all manner of kind feeling, the chief gave them to understand that he wished to show them something remarkable, and that he desired they would go with him for that purpose. To this consent was given ; although, as the chief had with him a great number of his people, caution and circumspection were used. He then conducted them directly to the island where Ribaud had set up on a mound a stone column ornamented with the arms of the king of France. On approaching^ they found that these Indians were worshipping this stone as an idol ; and the chief himself, having saluted it with signs of reverence such as his subjects were in the habit of showing to himself, kissed it. His men followed his example^ and we were invited to do the same. Before the monument there lay various offerings of the fruits, and edible or medicinal roots, growing thereabouts ; vessels of perfumed oils ; a bow, and arrows ; and it was wreathed around from top to bottom with flowers of all sorts, and boughs of the trees esteemed choicest. After witnessing these ceremonies of these poor savages, our men returned to their companions, and set about choosing a place for erecting a fort.

This chief, Athore, is very handsome, prudent, honorable, strong, and of very great stature, being more than half a foot taller than the tallest of our men ; and his bearing was marked by a modest gravity, which had a strikingly majestic effect. He had married his mother, and had by her a number of sons and daughters, whom he showed to us, striking his thigh as he did so. After this marriage, his father Saturioua lived with her no longer.” Narrative of Le Moyne, Jacques Le Moyne

“…Then the chief suggested going to see the stone column that we had erected during the voyage of Jean Ribault, and of which I have already spoken. It was a thing to which they ascribed great significance. Having granted their request to go to the place where the stone was set up, we found it to be crowned with magnolia garlands and at its foot there were little baskets of corn which they called in their language ‘tapaga tapola.’ They kissed the stone on their arrival with great reverence and asked us to do the same. As a matter of friendship we could not refuse, and when this was done the chief took me by the hand as if he had a great secret to tell me, and showed me by signs how far up the river his dominion lay. He said that he was called Paracousi Satouriona, which amounts to King Satouriona.” Three Voyages, Renee Laudonniere

The French were quite impressed with the artistry of the natives:

“…I returned the next day with my lieutenant and a number of soldiers to visit the chief of the River of May. He waited for us at the same place where we had talked to him the day before. We found him in the shade of an arbor, accompanied by eighty Indians. He was clothed in a great deerskin, dressed out like chamois and painted in strange designs of various colors. The paintings were so naturally charming and still so consistent with the rules of art that no professional artist could find fault with them. The natural ability of these strange people is so perfectly adjusted that, without sophisticated artistry, they can content they eye of the trained artist, even the perfectionist.” Three Voyages, Rene Laudonniere