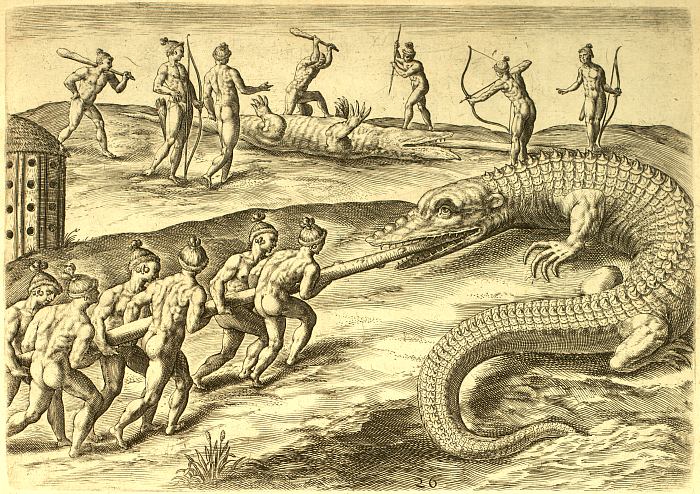 Their way of attacking crocodiles is as follows: They put up, near a river, a little hut full of cracks and holes, and in this they station a watchman, so that he can see the crocodiles, and hear them, a good way off; for, when driven by hunger, they come out of the rivers, and crawl about on the islands after prey, and, if they find none, they make such a frightful noise that it can be heard for half a mile. Then the watchman calls the rest of the watch, who are in readiness ; and, taking a portion, ten or twelve feet long, of the stem of a tree, they go out to find the monster, who is crawling along with his mouth wide open, all ready to catch one of them if he can ; and with the greatest quickness they push the pole, small end first, as deep as possible down his throat, so that the roughness and irregularity of the bark may hold it from being got out again. Then they turn the crocodile over on his back, and with clubs and arrows pound and pierce his belly, which is softer ; for his back, especially if he is an old one, is impenetrable, being protected by hard scales. This is their way of hunting crocodiles ; by which they are, nevertheless, so much annoyed that they have to keep up a regular watch against them both day and night, as we should do against the most dangerous enemy.” Narrative of Le Moyne, Jacques Le Moyne