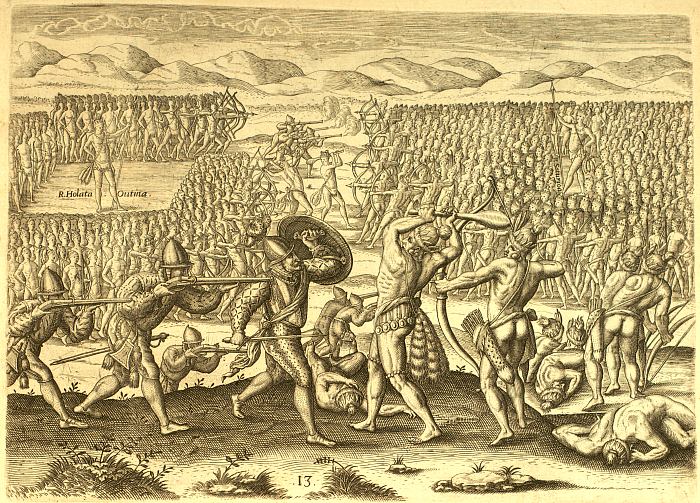 Oiitinay with the help of the French, gains a victory over his enemy Potanou,

This report so terrified the chief that he began to consider not how to come up with the enemy, but how to get safe back again. But D’Ottigny, greatly vexed at the idea of making such exertions only to return without bringing any thing to pass, threatened to consider him a base chief, and of no courage, if he should not risk an action ; and, by force of reproaches and some threats too, brought him to order an attack. He, however, put the French in the advance, as they were quite willing to have him do ; and indeed, unless they had sustained the whole brunt of the battle, killing very many of the enemy, and putting to flight the army of the chief Potanou, there is no question but Outina would have been routed ; for it became evident that the sorcerer had made a true report of the facts, and he must certainly have been possessed by a devil. Outina, however, quite contented with the flight of the enemy, recalled his men, and marched for home, to the great wrath of D’Ottigny, who wished to follow up the victory.” Narrative of Le Moyne, Jacques Le Moyne