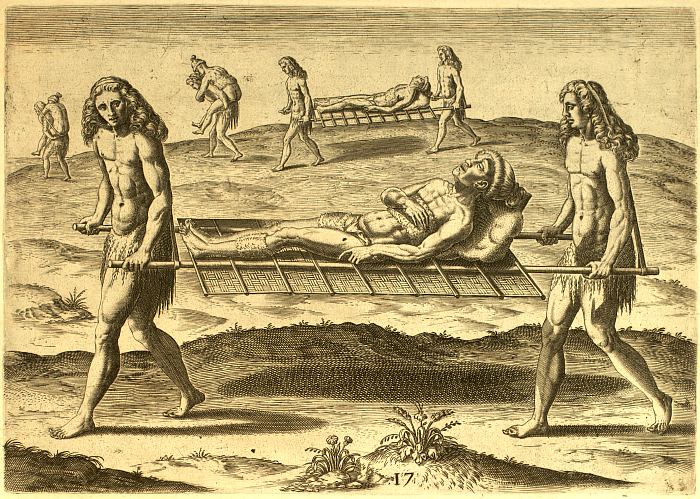 Employments of the hermaphrodites.

“Hermaphrodites, partaking of the nature of each sex, are quite common in these part’s, and are considered odious by the Indians themselves, who, however, employ them, as they are strong, instead of beasts of burden. When a chief goes out to war, the hermaphrodites carry the provisions. When any Indian is dead of wounds or disease, two hermaphrodites take a couple of stout poles, fasten cross-pieces on them, and attach to these a mat woven of reeds. On this they place the deceased, with a skin under his head, a second bound around his body, a third around one thigh, a fourth around one leg. Why these are so used, I did not ascertain ; but I imagine by way of ornament, as in some cases they do not go so far, but put the skin upon one leg only. Then they take thongs of hide, three or four fingers broad, fasten the ends to the ends of the poles, and put the middle over their heads, which are remarkably hard ; and in this manner they carry the deceased to the place of burial. Persons having contagious diseases are also carried to places appointed for the purpose, on the shoulders of the hermaphrodites, who supply them with food, and take care of them, until they get quite well again.” Narrative of Le Moyne, Jacques Le Moyne