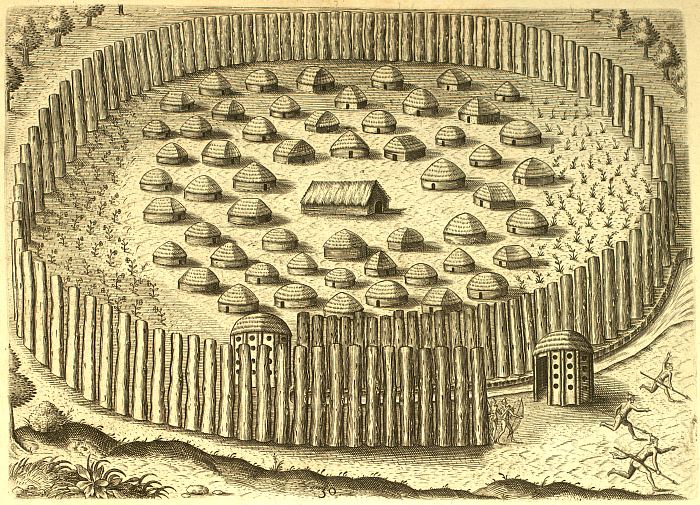 Construction of fortified towns among the Floridians.

The Indians are accustomed to build their fortified towns as follows : A position is selected near the channel of some swift stream. They level it as even as possible, and then dig a ditch in a circle around the site, in which they set thick round pales, close together, to twice the height of a man ; and they carry this paling some ways past the beginning of it, spiral-wise, to make a narrow entrance admitting not more than two persons abreast. The course of the stream is also diverted to this entrance ; and at each end of it they are accustomed to erect a small round building, each full of cracks and holes, and built, considering their means, with much elegance. In these they station as sentinels men who can smell the traces of an enemy at a great distance, and who, as soon as they perceive such traces, set off to discover them. As soon as they find them, they set up a cry which summons those within the town to the defence, armed with bows and arrows and clubs. The chiefs dwelling stands in the middle of the town, and is partly underground, in consequence of the sun’s heat. Around this are the houses of the principal men, all lightly roofed with palm-branches, as they are occupied only nine months in the year ; the other three, as has been related, being spent in the woods. When they come back, they occupy their houses again ; and, if they find that the enemy has burnt them down, they build others of similar materials. Thus magnificent are the palaces of the Indians.” Narrative of Le Moyne, Jacques Le Moyne