The First Pictures of Native Americans by Europeans 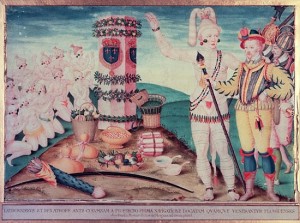 La Florida is the name the Spanish gave to most of eastern North America not just the present-day state of Florida. Le Moyne was an artist on the expedition of Rene de Laudoneire which created the first European colony in the New World at Fort Caroline possibly in modern-day Jacksonville, Florida or Darien, Georgia. This colony predates St. Augustine in Florida, Jamestown in Virginia and Plymouth in Massachusetts. This exhibit showcases the artwork he created which depicts the lives of the local Timucua Indians, the first known images of Native Americans in the New World by a European artist. His original artwork was lost but recreated and published by artist Theodor de Bry.

Learn more about the ancient Native American civilizations of Florida at our sister site, LostWorlds.org. Learn more about Le Moyne and the French explorations in the southeastern U.S. with the following books & videos:
Tagged with

One thought on “Le Moyne’s Indians of La Florida”