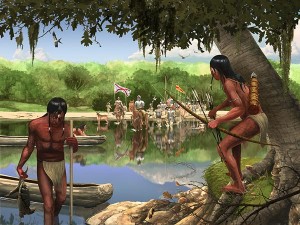 The discovery suggests an expedition led by conquistador Hernando de Soto ventured far off its presumed course—which took the men from Florida to Missouri—and engaged in ceremonies in a thatched, pyramid-like temple.

The discovery could redraw the map of de Soto’s 1539-41 march into North America, where he hoped to replicate Spain’s overthrow of the Inca Empire in South America. There, the conquistador had served at the side of leader Francisco Pizarro.

A continent and five centuries away, an excavation organized by Atlanta’s Fernbank Museum of Natural History found buried glass beads, iron tools, and brass and silver ornaments dating to the mid-1500s. The southern-Georgia location—where they’d been searching for a 17th-century Spanish mission—came to be called the Glass Site.

“For an Indian in the South 500 years ago, things like glass beads and iron tools might as well have been iPhones,” said project leader Dennis Blanton, an independent archaeologist who until recently was Fernbank’s staff archaeologist.

“These were things that were just astonishing to them. They were made of materials that were unknown and were sometimes in brilliant blue and red colors that were unmatched in the native world.”

Blanton called the finding a “stunning surprise.” Prior to the discovery, it had been generally accepted that de Soto and his men had crossed a river about 100 miles (160 kilometers) upstream of the site, but archaeologists hadn’t suspect that the expedition had ventured so far south and east.