also in Florida, where he had remayned sixe yeeres,

in mine and Master Heriots hearing. 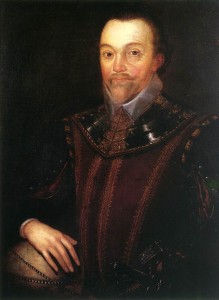 He further affirmeth, that there is a citie Northwestward from S. Helenes in the mountaines, which the Spaniards call La grand Copal, and is very great and rich, and that in these mountains there is great store of Christal, golde, and Rubies, and Diamonds: And that a Spaniard brought from thence a Diamond which was worth five thousand crownes, which Pedro Melendes the marques nephew to olde Pedro Melendes that slew Ribault, and is now governer of Florida, weareth. He saith also, that to make passage unto these mountaines, it is needefull to have store of Hatchets to give unto the Indians, and store of Pickaxes to breake the mountaines, which shine so bright in the day in some places, that they cannot behold them, and therefore they travell unto them by night. Also corslets of Cotton, which the Spanyards call Zecopitz, are necessary to bee had against the arrowes of the Savages.

The things, as he reporteth, that the Floridians make most account of, are red Cloth, or redde Cotton to make baudricks or gyrdles: copper, and hatchets to cut withall.

The Spaniards have all demaunded leave at their owne costs, to discouer these mountaines, which the King denyeth, for feare lest the English or French would enter into the same action once knowen.

All the Spaniards would passe up by the river of Saint Helena unto the mountaines of golde and Chrystall.

The Spaniards entring 50. leagues up Saint Helena, found Indians wearing golde rings at their nostrels and eares. They found also Oxen, but lesse then ours.

Sixe leagues from Saint Helena toward the North, there is a poynt that runneth farre into the sea, which is the marke to the Seamen to finde Saint Helena and Waterin.

Waterin is a river fortie leagues distant Northward from Saint Helena, where any fleete of great ships may ride safely. I take this river to be that which we call Waren in Virginia, whither at Christmasse last 1585. the Spaniards sent a barke with fortie men to discover where we were seated: in which barke was Nicholas Burgoignon the reporter of all these things.

The Spaniards of S. Augustine have slaine three hundred of the subjects of Potanou. One Potassi is neighbour to Potanou. Oratina is he which the French history calleth Olala Outina.

(From The principal navigations, voyages, traffiques & discoveries of the English Nation, Volume 9 By Richard Hakluyt)