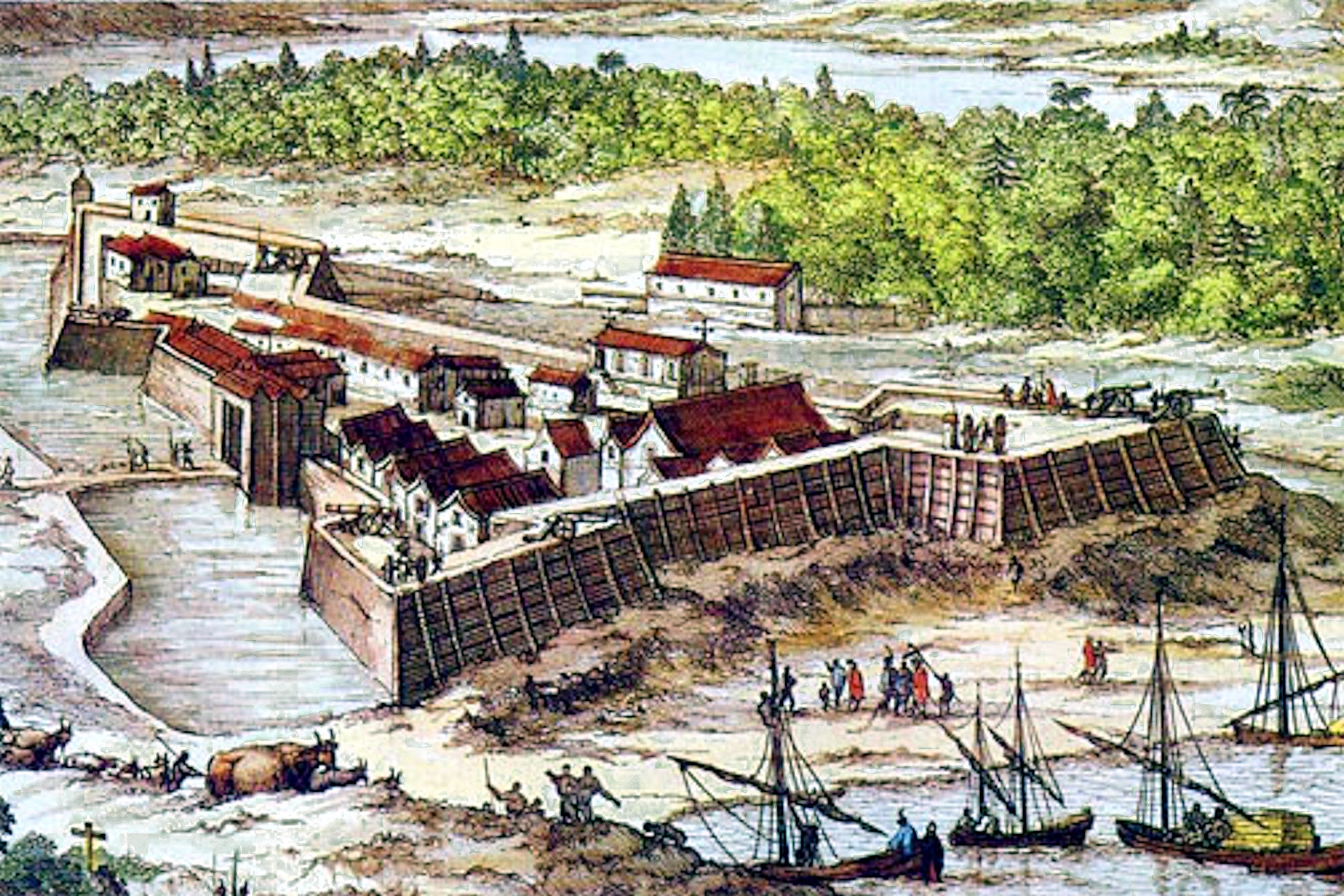 For 150 years researchers have been unsuccessful in unearthing the remains of the French settlement known as Fort Caroline. A new analysis of Spanish and French written, eyewitness accounts of its location and description of the rivers, geography and Native American tribes in its vicinity has revealed that the fort was located along the Altamaha River near Darien, Georgia not the St. John’s River in Jacksonville, Florida. Although academic consensus holds that this early French settlement was located in modern Jacksonville, Florida, no physical evidence for the fort has ever been found despite numerous archaeological investigations. This new analysis suggests these researchers have been searching in the wrong place.

The first written account about the location of Fort Caroline comes from one of its French residents named Le Moyne. Le Moyne noted that the fort was located on the River of May. His description of the river is more consistent with the Altamaha in Darien than the St. John’s in Jacksonville:

“A long way from the place where our fort was built there are high mountains, called the Apalatci in the Indian language, where…three large streams rise and wash down silt in which a lot of gold, silver and copper is mixed. They put it in canoes and transport it down a great river, which we named the River of May and which flows to the sea.”

The St. John’s River does not flow south to the coast from the Appalachian Mountains. Nor are there any known gold deposits at the source of the St. John’s River. The Altamaha River does, in fact, flow from the Appalachian Mountains via its tributaries the Oconee and Apalachee Rivers. There are also known gold deposits in these areas. In fact, America’s first gold rush occurred in this region of Georgia. Thus French accounts place the fort on the Altamaha River in Georgia not the St. John’s River in Florida.

The next written account of the location of Fort Caroline was provided by Hernando Fontaneda. Fontaneda was a Spanish sailor who was shipwrecked in Florida and lived there among the Indian tribes for 17 years. During this time he travelled extensively as a trader among the various tribes of the region. In his written accounts he claimed the fort was on the San Mateo River. Academics have asserted that this is one-in-the-same as the St. John’s River but Fontaneda’s description of the river simply doesn’t support this assertion. Fontaneda notes:

“By way of this River San Mateo, one may go to Tocobaga, on the other side of Florida, to the west; I do not mean all the way by the river, but in this manner: Enter over the bar of the San Mateo, and arrive at Zaravay, which is fifty or sixty leagues in the interior up the river, or at the Province of Utina, and there disembark, keeping a westerly course from town to town, until coming upon the people of Cafiogacola, subjects of Tocobaga; and thence upon the country of Tocobaga itself, which lies within on another large river, where Soto was, and where he died .”

A Spanish league was approximately 2.8 miles thus traveling fifty or sixty leagues up the St. John’s would take one to Orlando, Florida. It certainly wouldn’t take one to the west coast of Florida where a 1625 map placed the Tocobago as living at the mouth of the Chattahoochee/Apalachicola River system. Yet if one followed Fontaneda’s directions west on the Altamaha River they would arrive in the Big Bend area of its tributary the Ocmulgee River near modern day Jacksonville, Georgia (not to be confused with Jacksonville, Florida.) From here one could easily travel west to reach the Chattahoochee River. Additionally, Fontaneda stated the Province of Utina was located here at the river’s westernmost point. The Spanish did build a mission to the Utina and scholars place it near modern-day Jacksonville, Georgia. No mission to the Utina was ever built along the St. John’s River in Florida. Thus this Spanish eyewitness written account further supports the Altamaha as the River of May/River San Mateo where Fort Caroline was located.

The Spanish general, Pedro Menendez, who launched a surprise attack on Fort Caroline also left a written account of his expedition. He noted:

“Not knowing the way, we hoped to get there in two days, it being distant about eight leagues or so, as we were told by two Indians who went with us as guides. Leaving this Fort of St. Augustine in the order above described and with determination on the eighteenth of September, we found the rivers so swollen from the copious rains that it was impossible to ford them and we were obliged, to take a circuitous route which had never been used before through swamp and un­known roads to avoid the rivers. After walking until nine or ten o’clock at night, on the morn­ing of the twentieth, which is the feast of San Mateo, we arrived in sight of the Fort.”

If we accept modern academic consensus that Menendez marched from modern-day St. Augustine, Florida to modern St. John’s Bluff (Fort Caroline) in Jacksonville, Florida then we have some explaining to do. There are no major rivers along this route which would have been “so swollen” they required Menendez and his men “to take a circuitous route” to avoid them. There are only a couple of creeks along this route and only one, San Pablo Creek, is large enough that it may have caused the soldiers to take a short detour around it. (Worse still, there is a direct route along where modern highway A1A runs that would have allowed Menendez to avoid all of these obstacles and arrive much more quickly than a circuitous inland route. So why would he purposefully choose a slower, harder route if his goal was to get there quickly before the arrival of French reinforcements?)

According to Spanish accounts, the original Fort St. Augustine was burned by local Indian tribes a year after its founding and the settlement was moved far enough away to be safe from these tribes. According to French accounts the original Fort St. Augustine was built near an Indian town named Seloy. All maps from the 1600s show this town as being located on the north side of either the St. Mary’s or Satilla Rivers with the Satilla being the most likely candidate. If this was the case then Menendez’s account of taking a circuitous route to avoid swollen rivers would now make sense since there are multiple rivers and creeks between the north bank of the Satilla River and the Altamaha River.

Did English naturalist William Bartram stumble upon the ruins of Fort Caroline along the south channel of the Altamaha River near Darien, Georgia back in 1776? In his writings Bartram noted:

“On the west banks of the south channel, ten or twelve miles above its mouth, and nearly opposite Darien, are to be seen, the remains of an ancient fort, or fortification; it is now a regular tetragon terrace, about four feet high, with bastions at each angle; the area may contain about an acre of ground, but the fosse which surrounded it is nearly filled up. There are large Live Oaks, Pines, and other trees, growing upon it, and in the old fields adjoining. It is supposed to have been the work of the French or Spaniards. A large swamp lies betwixt it and the river, and a considerable creek runs close by the works, and enters the river through the swamp, a small distance above Broughton Island.”

This location would certainly match the eyewitness written accounts of the location of Fort Caroline. Only two other forts are known to have been constructed in the area, Fort King George and Bachelor’s Redoubt and these had only been abandoned for a few decades when Bartram visited so it’s unlikely they would have been confused with old forts built by the French or Spanish.

Based on these eyewitness written accounts it is nearly impossible to find a way to make them fit the geography of northeast Florida where current academic consensus places both Fort St. Augustine and Fort Caroline. The only location that fits all these accounts as well as period maps of the location of Fort Caroline is the Altamaha River. Perhaps instead of continuing to conduct archaeological investigations in Florida without producing results, the researchers could conduct a few simple shovel tests in locations along the Altamaha River using the Bartram account as a guide.