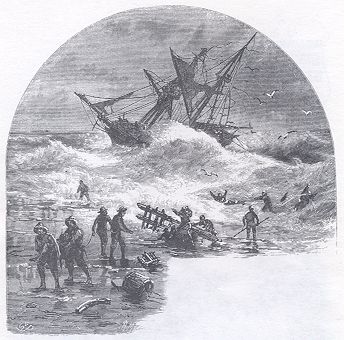 Hernando de Escalante Fontaneda (c. 1536 – after 1575, dates uncertain) was a Spanish shipwreck survivor who lived among the Indians of Florida for 17 years. His memoir [version 1] [version 2], written in 1575, is one of the most valuable contemporary accounts of American Indian life from that period.

Around 1549, when Fontaneda was thirteen, he and his brother were sailing to Spain, to study in Salamanca, when their ship wrecked on the coast of Florida, possibly during a hurricane. The crew and passengers were rescued by the Calusa, who enslaved them and eventually sacrificed everyone besides Fontaneda; the boy apparently escaped death by correctly interpreting their commands to sing and dance for them. He spent the next seventeen years living among the Calusa and other tribes, learning several languages and travelling extensively through Florida. Around 1566 Fontaneda was rescued from his captivity by Pedro Menéndez de Avilés, Florida’s first Spanish governor and founder of St. Augustine, who bargained for his freedom from King Carlos. An alternate claim is that Fontaneda was rescued by the Huguenots of Fort Caroline in 1565, and reunited with the Spanish when they took over the fort. He served as an interpreter and guide for Menéndez on a number of missions for the next several years, and returned to Spain in 1569 to reclaim his parents’ property from the Crown. In 1575 he wrote his memoir, which proved valuable to historians of the day such as Antonio de Herrera y Tordesillas, and remains so today.

Fontaneda provides the city of Tampa’s earliest written mention. He names 22 important villages of the Calusa, the first being “Tanpa”. He gives no details concerning the exact location of Tanpa, but archaeologist Jerald Milanich places the Calusa village of Tanpa at the mouth of Charlotte Harbor, the original “Bay of Tanpa”. A later Spanish expedition did not notice Charlotte Harbor while sailing north along the west coast of Florida and assumed that the current Tampa Bay was the bay they sought. The name was accidentally transferred north.[1]

The “Memoir” also proved instrumental in the development of the Fountain of Youth legend as an early mention of Juan Ponce de León looking for the healing waters in Florida, a detail almost inseparable from the myth today. Though Fontaneda did not believe the story, later historians were less incredulous.