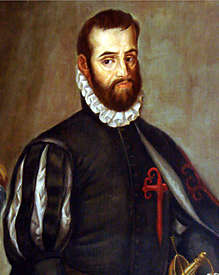 I wrote to Your Majesty from aboard the galleon San Salvador on September llth, this being the day she left Port. The duplicate of the letter goes in this, and later on I will send the other. While I was on the Bar in a sloop with two small boats with artillery and ammunition there came upon us four French galleons which had run us down with two or three small vessels to prevent us from landing here. Taking the artillery and provisions, although the weather was not propitious for crossing the Bar, I preferred to take the chance rather than surrender myself and one hundred and fifty persons, who were with me, into their power. Our Lord miracu­lously saved us. The tide was low, there being only one and a half scant fathoms of water on the Bar, and their vessel required one and a half long fathoms. They saw we had escaped them, as they spoke asking me to surrender, to have no fear. They then turned to search for the galleon, thinking we could not escape them. Two days out a heavy storm and tornado overtook them. It seemed to me they could not return to their Fort, running too great a risk of being lost, and to return to capture us they would have to bring a larger force and of the best they had. Thinking that their Fort would remain weak and it was the right time to capture it, I called a council of the captains, who agreed with me, and decided to attack the Fort by land. I therefore took five hundred men, three hundred arquebusiers, the rest pikemen, and with these few, taking our knapsacks and putting in each six pounds of biscuit and a measure of one and a half gallons of wine, with our arms and am­munition; each Captain and soldier — I was among the first setting the example, carrying this food and arms on my back. Not knowing the way, we hoped to get there in two days, it being distant about eight leagues or so, as we were told by two Indians who went with us as guides. Leaving this Fort of St. Augustine in the order above described and with determination on the eighteenth of September, we found the rivers so swollen from the copious rains that it was impossible to ford them and we were obliged, to take a circuitous route which had never been used before through swamp and un­known roads to avoid the rivers.

After walking until nine or ten o’clock at night, on the morn­ing of the twentieth, which is the feast of San Mateo, we arrived in sight of the Fort. Having offered prayers to the Blessed Lord and His Holy Mother, supplicating them to give us victory over these Lutherans, it was agreed that with twenty ladders, which we carried, we would assail the Fort. His Divine Majesty had mercy upon us and guided us in such a way that without losing one man and with only one injured (who is now well), we took the Fort with all it contained, killing about two hundred and thirty men; the other ten we took as prisoners to the forest. Among them were many noble­men, one who was Governor and Judge, called Monsieur Laudon­nier, a relative of the French Admiral, and who had been his steward. This Laudonnier escaped to the woods and was pursued by one of the soldiers who wounded him, and we know not what has become of him, as he and the others escaped by swimming out to two small boats of the three vessels that were opposite the Fort, with about fifty or sixty persons. I sent them a cannonade and call of the trumpet to surrender themselves, vessels, and arms. They re­fused, so with the artillery found in the Fort we sank one vessel; the others taking up the men went down the river where they had two other vessels anchored laden with provisions, being of the seven sent from France, and which had not yet been unloaded. It did not seem to me right to leave the Fort and pursue them until I had re­paired three boats we found in the Fort. The Indians notified them of our actions. As they were so few they took the two best and strongest vessels and sank the other. In three days they had fled. Being informed of this by the Indians, I did not pursue them. Later from the Fort they wrote me that about twenty Frenchmen had appeared in the forest with no clothing but a shirt, and many of them were wounded. It was believed that Monsieur Laudonnier was among them. I have sent word that they make every effort to cap­ture them and bring them to justice. In the Fort were found, among women, creatures, and children under fifteen years of age, about fifty persons. It causes me deep sorrow to see them among my people on account of their horrid religious sect, and I fear our Lord would punish me should I use cruelty with them. Eight or ten of the boys were born here.

These French have many friends among the Indians, who show much feeling at their loss, especially for two or three teachers of their hateful doctrine which they taught to the Indian chiefs, who followed them as the Apostles did our Lord. It is a thing of admira­tion to see how these Lutherans enchanted the poor savage people. I shall use every means to gain the good will of these Indians who were such friends to the French, and there is no reason, why I should break with them, and if 1 can live with them at peace it will be well; they are such traitors, thieves, and drunkards, that it is almost impossible to do so. These chiefs and the Indians, their enemies, all show friendship towards me, which I return and shall continue, unless their depredations increase that I may have to do otherwise.

On the 28th of September the Indians notified me that many Frenchmen were about six leagues from here on the coast, that they had lost their vessels and escaped by swimming and in boats. Tak­ing fifty soldiers I was with them next morning at daylight, and, leaving my men in ambush, I took one with me to the banks of the river, because they were on one side and I on the other bank. I spoke to them, told them I was Spanish; they said they were French. They asked me to come over to them either alone or with my partner, the river being narrow. I replied that we did not know how to swim, but that they could safely come to us. They agreed to do so, and sent a man of some intellect, master of a boat, who care­fully related to me how they had left their Fort with four galleons and eight small vessels, that each carried twenty-four oars with four hundred picked soldiers and two hundred marines and John Ribault as General and Monsieur LeGrange, who was General of the Infan­try, and other good captains, soldiers, and gentlemen, with the in­tention of finding me on the sea, and if I attempted to land, to land their people on the small boats and capture me. That if they had wanted to land they could easily have done so, but they had not dared and wanted to return to their Fort. That they were over­taken by a hurricane and tempest and were wrecked about twenty or twenty-five leagues from here. That of the four hundred only forty had survived; that the others had perished or were killed by the Indians. That fifty were carried prisoners by the Indians; that John Ribault with his captain were anchored five leagues from there in the swamp without trees, and he had in the vessel with him two hundred persons, more or less, and they believed them to have perished with all the artillery and ammunition, which was a great deal and good. Part of it was with John Ribault and what they had was certainly lost. They were saved, and he asked for himself and companions safe passage to their Fort, since they were not at war with the Spaniards. I then told him how we had taken their Fort and hanged all those we found in it, because they had built it with­out Your Majesty’s permission and because they were scattering the odious Lutheran doctrine in these Provinces, and that I had [to make] war [with] fire and blood, as Governor and Captain-General of these Provinces, against all those who came to sow this hateful doctrine; representing to him that I came by order of Your Maj­esty to place the Gospel in these parts and to enlighten the natives in all that the Holy Church of Rome says and does so as to save their souls. That I would not give them passage; rather would I fol­low them by sea and land until I had taken their lives. He begged to be allowed to go with this embassy and that he would return at night swimming, if I would grant him his life. I did so to show him that I was in earnest and because he would enlighten me on many subjects. Immediately after his return to his companions there came a gentleman, a lieutenant of Monsieur Laudonnier, a man well versed and cunning to tempt me. After much talk he offered to give up their arms if I would grant their lives. I told him he could sur­render the arms and give themselves up to my mercy, that I might do with them that which our Lord ordered. More than this he could not get from me, and that God did not expect more of me. Thus he returned and they came to deliver up their arms. I had their hands tied behind them and had them stabbed to death, leaving only six­teen, twelve being great big men, mariners whom they had stolen, the other four master carpenters and caulkers — people for whom we have much need, and it seemed to me to punish them in this manner would be serving God, our Lord, and Your Majesty. Here­after they will leave us free to plant the Gospel, enlighten the na­tives, and bring them to obedience and submission to Your Maj­esty. The lands being extensive, it will be well to make them work fifty years — besides, a good beginning makes a good end, so I have hopes in our Lord that in all He will grant me prosperity and suc­cess, so that I and my descendants may give to Your Majesty those Kingdoms full and return the people Christians. My particular in­terest as I have written Your Majesty is this: We are gaining great favor with the Indians and will be feared by them, although we make them many gifts.