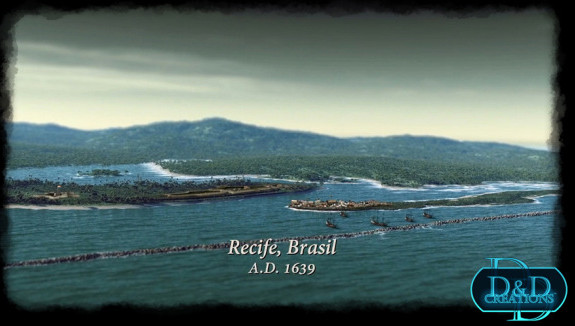 Animation companies D&D Creations and MiniVegas were hired to create 3-D computer recreations of Dutch outposts throughout the world during the Age of Exploration. One such recreation was of a colony located in the New World at Recife, Brazil. Read more about this project below:

Saturday was a special day for The Netherlands; after 10 years of renovation, the famous Rijksmuseum in Amsterdam has re-opened its doors to the public. Since thousands of people are intrested in visiting the museum and perhaps spending some days in this beautiful city, we would like to grab the chance to showcase one of our projects, which has also recently gone public, and would be a nice addition to your museum citytrip.

At the end of last year, D&D Creations was involved in the production of a historical animation for the Amsterdam Museum. Working together with the Amsterdam- and Los Angeles-based studio MiniVegas, our goal was to create short portions of animations, which represent some Dutch colonies in the 17th Century (which the Dutch call The Golden Age/De Gouden Eeuw). At D&D Creations we created the natural 3D environments, including terrains, sea, materials, vegetation, atmosphere and lighting in Vue. The full animation was composited and postworked at MiniVegas.

You can watch a video of some of these animations below: