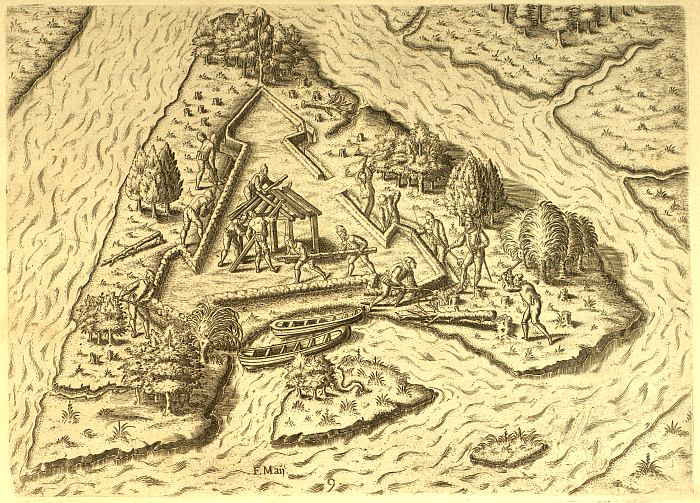 After exploring many of the rivers in that country, it was finally decided that the River of May was the best one for an establishment, because millet and breadstuffs were most abundant there, besides the gold and silver that had been discovered there on the first voyage. They therefore sailed for that river; and, after ascending it to the neighborhood of a certain mount, they selected a place more fit for the site of their fort than any previously observed. Next day, as soon as it was light, after offering prayers to God, and giving thanks for their prosperous coming into the province, they all went briskly to work ; and, after a triangular outline had been measured out, they all began, —some to dig in the earth, some to make fascines of brushwood, some to put up the wall. Every man was briskly engaged with spade, saw, axe, or some other tool.; and so diligent were they that the work went rapidly forward.” Narrative of Le Moyne, Jacques Le Moyne

“Then, having measured out a piece of ground in the form of a triangle, we went to work, some to dig on all sides, others to cut fagots, and others to raise and give form to the rampart. There was not a man among us who did not have either a shovel, a cutting hook, or a hatchet, either for clearing out the trees or for building the fort. We worked with such enthusiasm that within a few days the effect of our work was apparent. During this time Chief Satouriona, our nearest neighbor and on whose ground we built our fort, visited us, usually accompanied by his two sons and by a number of Indians, offering to be of service. For my part, I have him various articles of merchandise so that he would know the good will we bore to him and so that he would be anxious for our friendship. As the days went on, our friendship and alliance increased in strength.” Three Voyages, Rene Laudonniere