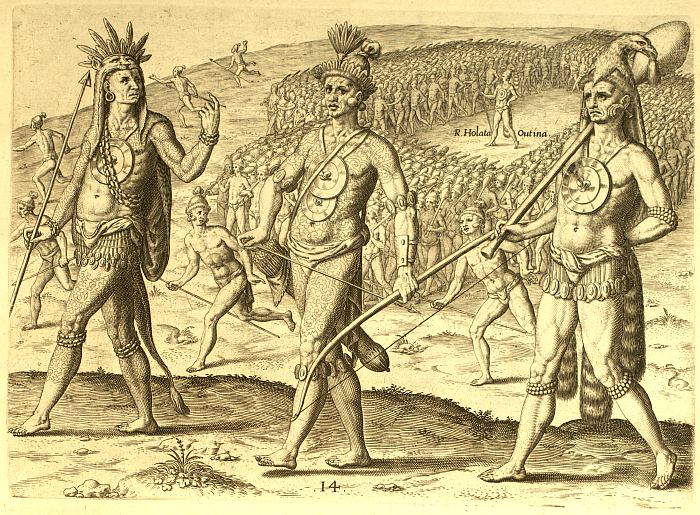 Order of march observed by Outina on a military expedition.

When Saturioua went to war, his men preserved no order, but went along one after another, just as it happened. On the contrary, his enemy Holata Outina, whose name, as I now remember, means “king of many kings,” and who was much more powerful than he as regards both wealth, and number of his subjects, used to march with regular ranks, like an organized army ; himself marching alone in the middle of the whole force, painted red. On the wings, or horns, of his order of march were his young men, the swiftest of whom, also painted red, acted as advanced guards and scouts for reconnoitring the enemy. These are able to follow up the. traces of the enemy by scent, as dogs do wild beasts ; and, when they come upon such traces, they immediately return to the army to report. And, as we make use of trumpets and drums in our armies to promulgate orders, so they have heralds, who by cries of certain sorts direct when to halt, or to advance, or to attack, or to perform any other military duty. After sunset they halt, and are never wont to give battle. For encamping, they are arranged in squads of ten each, the bravest men being put in squads by themselves. When the chief has chosen the place of encampment for the night, in open fields or woods, and after he has eaten, and is established by himself, the quartermasters place ten of these squads of the bravest men in a circle around him. About ten paces outside of this circle is placed another line of twenty squads ; at twenty yards farther, another of forty squads ; and so on, increasing the number and distance of these lines, according to the size of the army.” Narrative of Le Moyne, Jacques Le Moyne