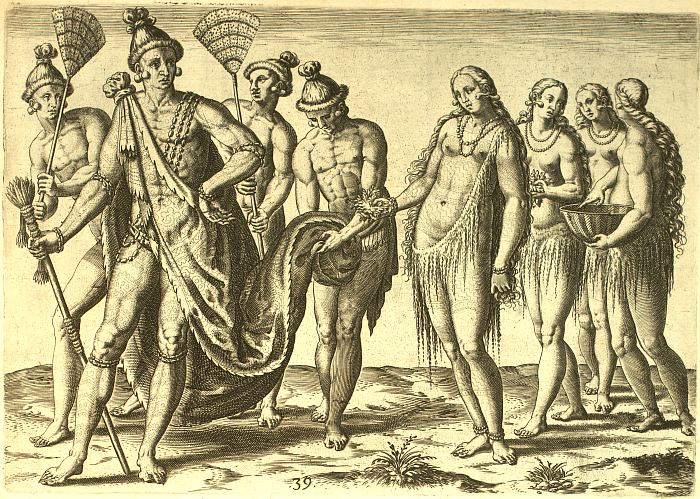 The king and queen taking a walk for their amusement.

Sometimes the king likes to take a walk in the evening in a neighboring wood, alone with his principal wife, wearing a deer s hide so elegantly prepared, and painted of various colors, so that nothing more beautifully finished can be seen anywhere. Two young men walk at his sides, carrying fans to make a breeze for him ; while a third, ornamented with little gold and silver balls hanging to his belt, goes behind, and holds up the deer s hide, so that it shall not drag on the ground. The queen and Her handmaids are adorned with belts hung on the shoulders or around the body, made of a kind of moss that grows on some trees ; with slender filaments which are attached to each other, after the fashion of links of a chain, of a bluish-green color, and so beautiful in texture that it might be mistaken for filaments of silk. The trees laden with this moss are beautiful to see ; for it sometimes hangs down from the highest boughs of a very tall tree to the ground. While hunting once with some of my fellow-soldiers in the woods near King Saturioua s residence, I saw him and his queen thus decorated.

The reader should be informed that all these chiefs and their wives ornament their skin with punctures arranged so as to make certain designs, as the following pictures show. Doing this sometimes makes them sick for seven or eight days. They rub the punctured places with a certain herb, which leaves an indelible color. For the sake of further ornament and magnificence, they let the nails of their fingers and toes grow, scraping them down at the sides with a certain shell, so that they are left very sharp. They are also in the habit of painting the skin around their mouths of a blue color.” Narrative of Le Moyne, Jacques Le Moyne