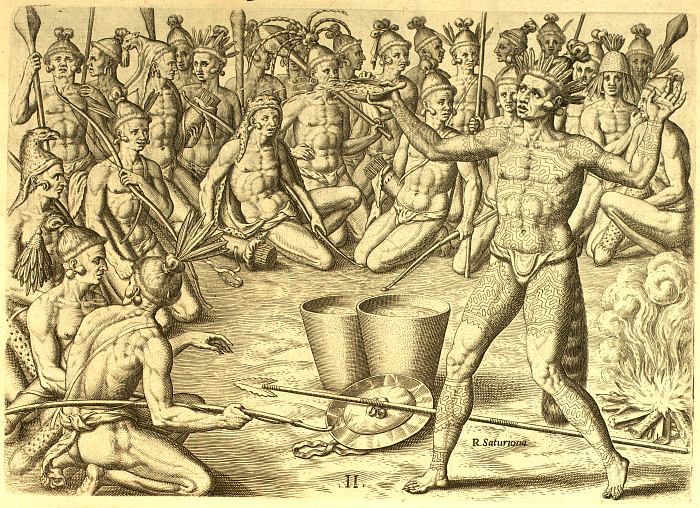 On July 28th the French ships departed Florida for their return to France. When they arrived back in Florida with fresh supplies Chief Satouriona sent his warriors to ask the French if they would assist him in a battle with his enemies. The French refused but Chief Satouriona continued his preparations for war including the following ceremony which the French witnessed:

“Ceremonies performed by Saturioua before going on an expedition against the enemy.

It is mentioned in the account of the second voyages that the French made a treaty of friendship with a powerful chief of the vicinity, named Saturioua, with agreement that they were to erect a fort in his territory, and were to be friends to his friends, and enemies to his enemies ; and, further, that on occasion they should furnish him some arquebusiers. About three months afterwards, he sent messengers to Laudonniire to ask for the arquebusiers according to the treaty, as he was about to make war upon his enemies. Laudonniere, however, sent to him Capt. La Caille with some men, to inform him courteously that he could not just then supply any soldiers, for the reason that he hoped to be able to make peace between theparties. But the chief was indignant at this reply, as he could not now put off his expedition, having got his provisions ready, and summoned the neighboring chiefs to his aid ; and he therefore prepared to set out at once. He assembled his men, decorated, after the Indian manner, with feathers and other things, in a level place, the soldiers of Laudonnifere being present ; and the force sat down in a circle, the chief being in the middle. A fire was then lighted on his left, and two great vessels full of water were set on his right. Then the chief, after rolling his eyes as if excited by anger, uttering some sounds deep down in his throat, and making various gestures, all at once raised a horrid yell; and all his soldiers repeated this yell, striking their hips, and rattling their weapons. Then the chief, taking a wooden platter of water, turned toward the sun, and worshipped it; praying to it for a victory over the enemy, and that, as he should now scatter the water that he had dipped up in the wooden platter, so might their blood be poured out. Then he flung the water with a great cast up into the air ; and, as it fell down upon his men, he added, ” As I have done with this water, so I pray that you may do with the blood of your enemies.” Then he poured the water in the other vase upon the fire, and said, ” So may you be able to extinguish -your enemies, and bring back their scalps.” Then they all arose, and set off by land up the river, upon their expedition.” Narrative of Le Moyne, Jacques Le Moyne

“The ceremony which this savage used before he embarked his army is well worth remembering. When he went down to the river bank he was surrounded by ten other chiefs. He promptly demanded that water be brought to him. This being done, he looked up to heaven and began to discuss many things by gestures, showing a great heat in his emotions and shaking his head first one way and then another. Then with a wrath such as I have never seen before, he turned his face toward the direction of his enemies to threaten them with death. He also looked toward the sun, praying for glorious victory over his enemies. Having done these things for at least a half hour, he sprinkled water from his hands over the heads of the chiefs, water which he had taken from a vessel that he held. Furiously he threw the rest of the water on a fire which had been expressly made for this purpose. That doen, he cried three times, ‘He, Thimogona,’ and was accompanied in this by more than five hundred Indians. They were all assembled there and cried out in unison, ‘He, Thimogona.’ According to one of the Indians this ceremony signified that Satouriona begged the sun to give him victory and happiness so that he could scatter the blood of his enemies as he had scattered the water at his pleasure. Moreover it besought that the chiefs who were sprinkled with a part of the water might return with the heads of their enemies, which is the greatest and only measure of their victory.” Three Voyages, Rene Laudonniere