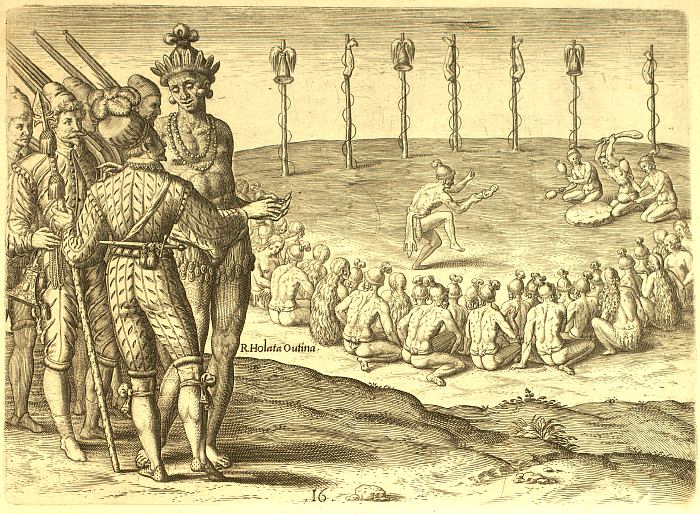 Trophies and ceremonies after a victory.

After returning from a military expedition, they assemble in a place set apart for the purpose, to which they bring the legs, arms, and scalps which they have taken from the enemy, and with solemn formalities fix them up on tall poles set in the ground in a row. Then they all, men and women, sit down on the ground in a circle before these members ; while the sorcerer, holding a small image in his hand, goes through a form of cursing the enemy, uttering in a low voice, according to their manner, a thousand imprecations. At the side of the circle opposite to him, there are placed three men kneeling down, one of whom holds in both hands a club, with which he pounds on a flat stone, marking time to every word of the sorcerer. At each side of him, the other two hold in each hand the fruit of a certain plant, something like a gourd or pumpkin, which has been dried, opened at each end, its marrow and seeds taken out, and then mounted on a stick, and charged with small stones or seeds of some kind. These they rattle after the fashion of a bell, accompanying the words of the sorcerer with a sort of song after their manner. They have such a celebration as this every time they take any of the enemy.” Narrative of Le Moyne, Jacques Le Moyne