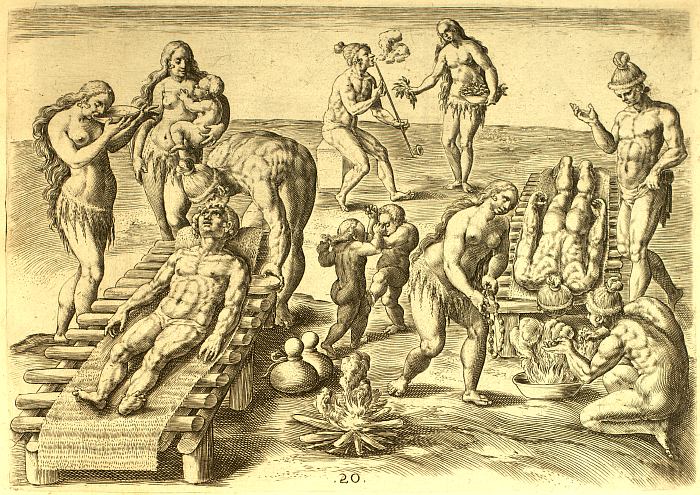 Mode of treating the sick.

Their way of curing diseases is as follows: They put up a bench or platform of sufficient length and breadth for the patient, as seen in the plate, and lay the sick person upon it with his face up or down, according to the nature of his complaint ; and, cutting into the skin of the forehead with a sharp shell, they suck out blood with their mouths, and spit it into an earthen vessel or a gourd bottle. Women who are suckling boys, or who are with child, come and drink this blood, particularly if it is that of a strong young man ; as it is expected to make their milk better, and to render the children who have the benefit of it bolder and more energetic. For those who are laid on their faces, they prepare fumigations by throwing certain seeds on hot coals; the smoke being to pass through the nose and mouth into all parts of the body, and thus to act as a vomit, or to overcome and expel the cause of the disease. They have a certain plant whose name has escaped me, which the Brazilians call peiunty and the Spaniards tapaco. The leaves of this, carefully dried, they place in the wider part of a pipe ; and setting them on fire, and putting the other end in their mouths, they inhale the smoke so strongly, that it comes out at their mouths and noses, and operates powerfully to expel the humors. In particular, they are extremely subject to the venereal disease, for curing which they have remedies of their own, supplied by nature.” Narrative of Le Moyne, Jacques Le Moyne