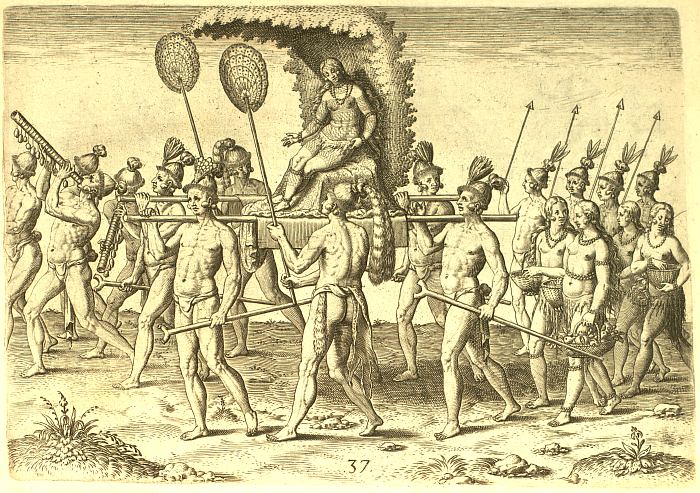 The display with which a queen elect is brought to the king.

When a king chooses to take a wife, he directs the tallest and handsomest of the daughters of the chief men to be selected. Then a seat is made on two stout poles, and covered with the skin of some rare sort of animal, while it is set off with a structure of boughs, bending over forward so as to shade the head of the sitter. The queen elect having been placed on this, four strong men take up the poles, and support them on their shoulders; each carrying in one hand a forked wooden stick to support the pole at halting. ‘Two more walk at the sides; each carrying on a staff a round screen elegantly made, to protect the queen from the sun’s rays. Others go before, blowing upon trumpets made of bark, which are smaller above, and larger at the farther end, and having only the two orifices, one at each end. They are hung with small oval balls of gold, silver, and brass, for the sake of a finer combination of sounds. Behind follow the most beautiful girls that can be found, elegantly decorated with necklaces and armlets of pearls, each carrying in her hand a basket full of choice fruits; and belted below the navel, and down to the thighs, with the moss of certain trees, to cover their nakedness. After them come the body-guards.” Narrative of Le Moyne, Jacques Le Moyne