for some positive statements of his own views, and of the particular object which the king desired to obtain in commanding my services. Upon this he promised that no services except honorable ones should be required of me ; and he informed me that my special duty, when we should reach the Indies, would be to map the seacoast, and lay down the position of towns, the depth and course of rivers, and the harbors ; and to represent also the dwellings of the natives, and whatever in the province might seem worthy of observation : all of which I performed to the best of my ability, as I showed his majesty, when, after having escaped from the remarkable perfidies and atrocious cruelties of the Spaniards, I returned to France.

On the 20th April, 1564, our three ships set sail from Havre de Grace, and steered direct for the Fortunate Islands, or, as seafaring men call them, the Canaries. Sailing thence, on the tropic we made the Antilles Islands, at one of which, called Dominica, we watered, losing, however, two men. Making sail again, we reached the coast of Florida, or New France as it is called, on Thursday, 22d June. 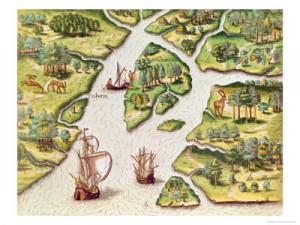 M. de Laudonniere having reconnoitred the stream named by Ribault the River of May, and finding it of easy navigation for ships, and offering a suitable place for a fort, set promptly about preparing to erect one, and sent back to France his largest ship, the ” Elizabeth of Honfleur,” commanded by Jean Lucas. Meanwhile all the seashore was occupied by immense numbers of men and women, who kept up fires, and against whom we naturally thought it necessary to be much on our guard. Gradually, however, it appeared that to injure us was the last thing in their thoughts : on the other hand, they showed numerous testimonies of friendship and liking, being seized with great admiration at finding our flesh so different from theirs in softness and tenderness, and our garments so different from their own. The commodities which we received from these new dealers were in great part such things as they value most, being for the support of life or the protection of the body. 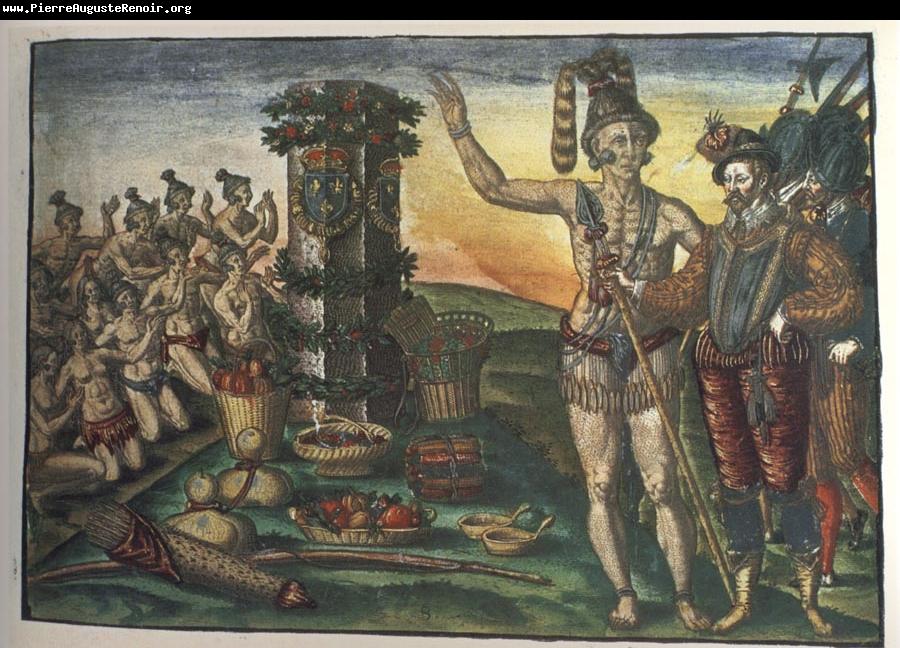 Such were grains of maize roasted, or ground into flour, or whole ears of it ; smoked lizards or other wild animals, such as they consider great delicacies and various kinds of roots, some for food, and some for medicine. When they found out after a time that the French were more desirous of metals and minerals, some brought them. M. de Laudonnidre, who soon perceived that our men were acting avariciously in their dealing, now forbade, on pain of death, any trading or exchange with the Indians for gold, silver, or minerals, unless all such should be put into a common stock for the benefit of all.

In the mean time several chiefs visited our commander, and signified to him that they were under the authority of a certain king named Saturioua, within the limits of whose dominions we were, whose dwelling was near us, and who could muster a force of some thousands of men. This information was thought good reason for hastening the completion of our fort. King Saturioua himself, on his part, like a prudent commander, sent out his scouts from day to day, to see what we were about; and being advised by them that we had marked out a triangle by stretching cords, and were digging up the earth on the lines of it, he became desirous of seeing for himself. He sent forward, however, some two hours in advance of his own appearance, an officer with a company of a hundred and twenty able-bodied men, armed with bows, arrows, clubs, and darts, and adorned, after the Indian manner, with their riches ; such as feathers of different kinds, necklaces of a select sort of shells, bracelets of fishes’ teeth, girdles of silver-colored balls, some round and some oblong ; and having many pearls fastened on their legs. Many of them had also hanging to their legs round flat plates of gold, silver, or brass, so that in walking they tinkled like little bells. This officer, having made his announce-