the weather ; and every man was making sure, from the amount of the gifts and trading so far, that he would quickly become rich. 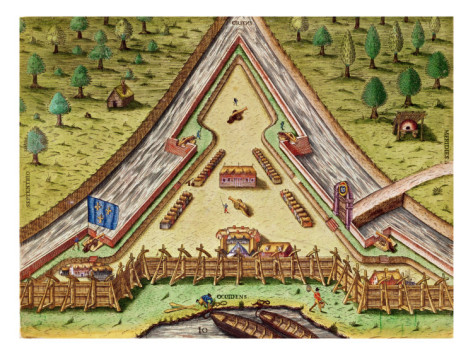 The fort being now completed, and a residence for himself, as well as a large building to contain the provisions and other indispensable military supplies, M. de Laudonniire proceeded to shorten the allowance of food and drink : so that, after three weeks, only one glass of spirit and water, half and half, was given out daily per man ; and as for provisions, which it had been hoped would be abundant in this New World, none at all were found ; and, unless the natives had furnished us from their own stores from day to day, some of us must assuredly have perished from starvation, especially such as did not know how to use fire-arms in hunting.

In the mean while M. de Laudonniere ordered his chief artificer, Jean des Hayes of Dieppe, to build two shallops, to be, according to my recollection, of thirty-five or forty feet keel, for exploring in the upper waters of the river, and along the seacoast; which were in good season nearly completed.

But by this time the noblemen who had come from France to the New World from ambitious motives only, and with splendid outfits, began to be greatly dissatisfied at finding that they realized none of the advantages which they had imagined, and promised themselves ; and complaints began daily to be made by many of them. On the other part M. de Laudonniere himself, who was a man too easily influenced by others, evidently fell into the hands of three or four parasites, and treated with contempt the soldiers, who were just those whom he should have most considered. And, what is far worse, indignation began to be felt by many who professed the desire of living according to the doctrine of the reformed gospel, for the reason that they found themselves without a minister of God’s word. 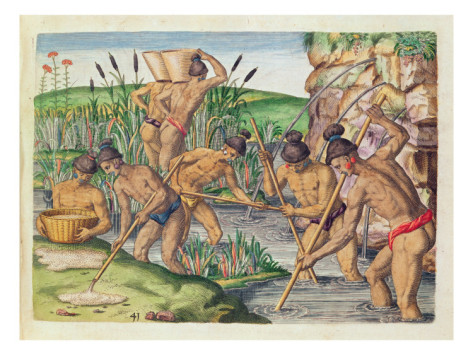 How the Indians dig for gold in the Appalachian Mountains

But to return to King Saturioua. This chief sent messengers to M. de Laudonniere, not only to confirm the league which had been made, but also to procure the performance of its conditions,- namely, that the latter was to be the friend of the king’s friends, and the enemy of his enemies ; as he was now organizing an expedition against them. M. de Laudonniere gave an ambiguous reply to these ambassadors ; for we had learned, in the course of an extended voyage up the main stream of the River of May, that the enemy of our neighbor King Saturioua was far more powerful than he ; and that, moreover, his friendship was indispensable to us for the reason that the road to the Apalatcy Mountains (which we were desirous of reaching, because we were informed that most of the gold and silver which we had received in trade was brought thence) lay through his dominions. Besides, some of our people were already with him, who had already sent to the fort a good deal of gold and silver, and were negotiating with him ; for M. de Laudonniere had orders to treat with this great king, Outina, on the same terms as above mentioned.

King Saturioua, having received this cold answer, now came to the fort, which was called Fort Carolina, with some twelve or fifteen hundred men ; but finding, to his surprise, that things were greatly changed, that he could no longer get across the ditch, but that there was only one entrance to the post, and that a very narrow one, he came thither, and found Capt. La Caille ; who announced to him, that, for the purpose of an interview, he would not be admitted into the fort unless without his men, or at most with not more than twenty of such as he might select. In astonishment at this information, he, however, dissimulated, and entered the fort with twenty of his followers, when every thing was exhibited to him. He was terribly frightened himself at the sound of the drums and trumpets, and at the reports of the brass cannon which were fired in his presence; and, when- he was told that all his force had run