NARRATIVE OF LE MOYNE, SURNAMED LE MORGUES, AN ARTIST WHO ACCOMPANIED THE FRENCH EXPEDITION TO FLORIDA UNDER LAUDONNIERE, 1564. 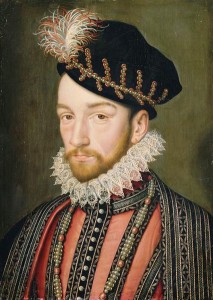 CHARLES IX, King of France, having been notified by the Admiral de Chitillon that there was too much delay in sending forward the re-enforcements needed by the small body of French whom Jean Ribaud had left to maintain the French dominion in Florida, gave orders to the admiral to fit out such a fleet as was required for the purpose. The admiral, in the mean while, recommended to the king a nobleman of the name of Renaud de Laudonniere ; a person well known at court, and of varied abilities, though experienced not so much in military as in naval affairs. The king accordingly appointed him his own lieutenant, and appropriated for the expedition the sum of a hundred thousand francs. The admiral, who was a man endowed with all the virtues, and eminent for Christian piety, was so zealous for the faithful doing of the king’s business, as to give special instructions to Laudonniere, exhorting him in particular to use all manner of diligence in doing his duty, and first of all, since he professed to be a religious man, to select the right sort of men, and such as feared God, to be of his company. He would do well, in the -next place, to engage as many skilled mechanics of all kinds as possible. In order to give him better facilities for these purposes he received a royal commission, bearing the king’s seal. Laudonniere accordingly repaired to Havre de Grace, where he proceeded to get his ships ready, and, according to his orders, with the greatest diligence sought out good men all over the kingdom ; so that I can safely assert that men of remarkable skill in all sorts of mechanical employments resorted to him. There also assembled a number of noble youths of ancient families, drawn only by the desire of viewing foreign countries ; for they asked no pay, volunteering for the expedition at their own cost and charges. The soldiers were chosen veterans, every man competent to act as an officer in time of battle. From Dieppe were obtained the two best navigators of our times, Michael le Vasseur and his brother Thomas le Vasseur, both of whom were employed in the king’s naval service. I also received orders to join the expedition, and to report to M. de Laudonniere.

All who came he received with courtesy and with magnificent promises. As, however, I was not unaware that the gentlemen of the court are in the habit of being liberal with their promises, I asked