which might justify me in supposing that they were disposed to consider any thing right which I might determine. It was now that both the Spaniards, whose long experience had familiarized them with the Indian character, cautioned me not to put any faith in them at all ; for that, when their conduct was most engaging, it was most certain that they were plotting some treachery ; and that they were by nature the most thorough traitors and deceivers. I had, however, already learned to distrust them ; for my own experience, and the reading of recent accounts, had acquainted me with their thousand arts and frauds.

” The two shallops being now ready, I gave orders to Vasseur, in charge of one of them, to explore the seacoast towards the north, and to go as far as the river where Adusta is king ; he being the chief from whose territory the French in the year 1562 procured supplies. I sent this chief two different suits of clothes, and some axes, knives, and other merchandise of small value, as a means of better obtaining his friendship. With the same object, I sent along with Vasseur a soldier named Aimon, who had been on the previous expedition to this chief, in hopes that he would remember him. And, before they embarked, I directed them to make careful inquiry what had happened to another soldier named Roussi, who had remained alone in that part of the country at the time when Nicolas Mallon, commanding a vessel, and the rest of his men concerned in the same previous expedition, embarked on their return to France. On their arrival our men learned that Roussi had been picked up and carried away by some vessel thereabouts ; and I afterwards learned that this was a Spanish vessel on a coasting expedition, and that he had been carried to Havana in her. King Adusta sent back the shallop fully laden with maize and beans, besides two deer, two skins painted after their fashion, and some pearls, — of little value, however, as they had been exposed to fire ; and he sent me word that he would give much land if I would settle in his territory, and that he had corn in store, and would give mc as much as I wanted. At this time, there came, during seven weeks, so many pigeons, that we sometimes shot more than two hundred a day in the woods about the fort. When Vasseur returned, sent a second expedition with two shallops, having soldiers and sailors aboard, with a present to be given in my name to the widow of a deceased chief named Hiouacara, who lived about twelve miles north of us. She received my men kindly, and loaded both the shallops for me with maize and nuts ; and she sent in addition some baskets full of cassina leaves, of which they make, a drink. The territory of this widow lady is said to produce the most and best quality of maize of any part of the seacoast. 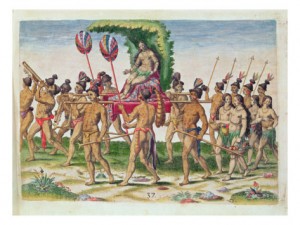 The same queen is reported to be the most beautiful of all the Indian women, and to stand in the highest esteem among them. Indeed, her subjects reverence her so much that they will not let her walk on the ground, but carry her about on their shoulders instead. Some days after she had thus sent me back my boats, she sent to me her hiatiqui, i.e., interpreter.

As I now judged that I had provisions enough to last until ships should come from France, I sent my two shallops (that my men might not be idle) on an exploring expedition up the river, which they ascended thirty miles above MathYaca, where they discovered a lake whose farther shore, as the Indians reported, could not be seen even from the tops of the tallest trees anywhere on this side. My men did not therefore attempt to go farther ; but, coming back by way of Chilili, they discovered in the middle of the stream an island called Edelano, the most delightful of all islands in the world. Although only about three miles long and broad, it is most abounding in men and fruits. Between the town Edelano and the riverside, the road lay along a walk of three hundred paces long and fifteen wide, on either side of which were immense trees whose branches formed such an elegant vaulting over-