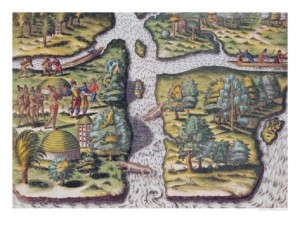 By these dealings M. la Roche Ferriere brought himself into the worst possible odor with King Outina, and still more among his subordinate chiefs, who conceived such a hatred for him that they would not even call him by name, saying always, instead, “Timogua,” that is, Enemy. As long, however, as La Roche Ferriere preserved the friendship of the three chiefs, he was able to go to and from the fort by other roads, as there are many small streams which empty into the River of May for fifteen or sixteen miles below the territory of King Outina.

I believe I shall not depart too far from my story if I mention a certain soldier who was emulous of the example of La Roche Ferriere, and therefore demanded permission from M. de Laudonniere to trade in another quarter. He was given it, but was warned to consider well what he was about, as it was not impossible that his attempt to open a trade would cost him his life; which, indeed, is what actually happened. This soldier was named Pierre Gambre. and was a young, strong, and active man, who had from early youth been brought up in the home of the Admiral de Chitillon. Having received his permission, he departed alone, without any servant, from the fort, laden with a parcel of cheap goods, and with his arquebuse, and began to trade up and down the country. He was so successful in his management, that he even came to exercise a sort of authority over the natives, whom he used to make bring his messages to us. At length, having visited a certain inferior chief called Adelano, who lived on a small island in the river, he became so friendly with him, and so great a favorite, that the chief gave him his daughter to wife. Although thus honored, he continued his pursuit of gain. In the chiefs absence, he exercised authority in his stead, and did it so tyrannically, requiring the Indians to obtain for him things quite out of their power, that he made himself hated by all of them. But, as he was beloved by the chief, none ventured to complain. It happened at length, that he asked leave of the chief to make a visit to the fort, as he had not seen his friends there for twelve months. He received permission, but on condition that he should return in a few days. Having got together all his wealth, and embarked it in a canoe or skiff which was furnished him for the purpose, and with two Indians to paddle, he took leave of the chief. While on the journey, one of his companions recalled to mind that he had been, on a former occasion, beaten with sticks by this soldier ; and, the booty now offering being an additional temptation, he concluded that so eligible an opportunity of securing at once revenge and plunder must not be missed. Accordingly, while the soldier was bending over a fire in complete security, the Indian seized an axe which lay next his victim, and split open his head. Then, seizing the goods, he and his companion fled. 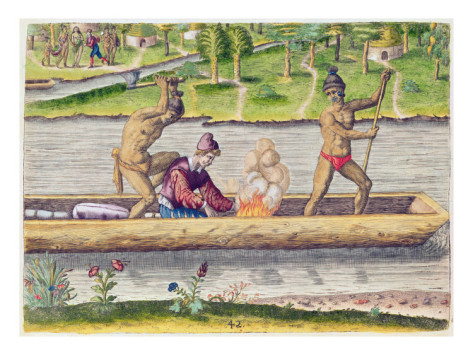 I will now return to the liberation of M. de Laudonniere, and to the account of what took place after the departure of our men ; who, by the way, had carried off with them certain half-casks of rich Spanish wine, which, as both M. de Laudonniere and his maid-servant asserted, had been put aside for the use of the sick. Capt. La Caille, who was wandering in the woods, learned from his younger brother, who had been acting as a messenger to keep him supplied with what his friends could furnish, of the departure of the men who had threatened his life, and at once came back to the fort. Here he set about encouraging the rest ; exhorted all to take possession of their arms again (those who had gone not having had any use for them) ; and M. de Laudonniere was brought ashore from the ship, and his Lieutenant d*Ottigny and Ensign d*Arlac were safely let out of their homes. The musterroll was called ; all took oath anew, both of allegiance to the king, and of resistance to the enemy, in whose number those were now reckoned who had treated us so wickedly and contemptuously.

Four captains were appointed ; the whole company was divided into four companies under them, and so all returned to their regular duties.