away, he readily believed it, as he would gladly have been farther off himself. This, indeed, made our name great through all those parts ; and, in fact, much more than the reality was believed of us. He did, however, after all, notify M. de Laudonniere that his faith was pledged, that his own (King Saturioua’s) forces were ready, that his supplies were at hand, and that his own subordinate chiefs were assembled. Failing, however, to obtain what he wished, he set out on his expedition with his own men. 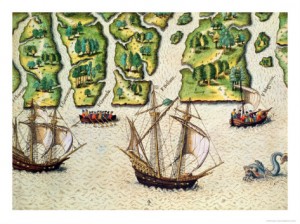 While these affairs were in progress, M. de Laudonniere sent his second ship, commanded by Pierre Capitaine (Petrus Ceiturto) to France. And now let the reader be pleased to observe how many were those who sought to return home. Among others, one young nobleman, De Marillac by name, was so earnestly desirous of going, that he promised M. de Laudonniere, if the latter would send him back in charge of despatches, to reveal to him matters of the utmost importance touching his life and good name ; on condition, however, that the papers containing these revelations should not be opened until after he (Marillac) had embarked. M. de Laudonniere too credulously agreed to this proposition.

On the very day when the ship was to sail, a certain nobleman of the name of M. de Gievre, of a good family, of the rank of count, one who feared God, and was liked by all, received warning, five or six hours before the time at which the information promised was to be put into the hands of M. de Laudonniere, that he would do well to escape, for that Marillac had laid a plot against him. He accordingly took refuge in the woods to shun the wrath of M. de Laudonniere, to whom Marillac had delivered some infamous libels written, as he asserted, in the hand of M. de Gidvre. Their purport was, that Laudonniere had made a wrongful use of the hundred thousand francs given him by the king, since he had brought no supply of provisions over with him ; that he had not brought over, as the admiral directed him to do, a minister of God’s word ; that he bestowed too much of his favor on tattlers and praters, but despised those of real merit ; and many other things which I do not now remember.

This exile of M. de Gievre was unwelcome to many good men, who, however, all kept silence. Gradually, however, some began to be dissatisfied with the bad provision of food, and others with the excess of labor required, and with its severity; particularly certain of the nobles, who considered that they should have been treated with more respect. After various interchange of opinions between individuals, secret consultations began to be held, at first by five or six persons only, but by more and more, until as many as thirty were engaged. But among the first who thus began to consult was one especial favorite of M. de Laudonniere ; and it is absolutely certain that it was the very best of the soldiers and noblemen who were engaged in these consultations, and that these influenced the rest; passing over those whom they despised as deficient in shrewdness, and whom, therefore, they did not admit into their counsels.

At a proper time, they addressed themselves to Capt. La Caille, to whom the plan had so far not been revealed, because all knew him to be a man of integrity himself, and who would require the utmost loyalty in all matters of duty from others. Him they now besought, that, as he was the senior captain, he would interest himself in this matter, which concerned all, and that he would consent to deliver to M. de Laudonniere their written statement of their grievances. La Caille promised his assistance; and, as they had selected him to take charge of the matter, he resolved to communicate it to M. de Laudonniere in their name, even though the commander should choose to be displeased, and even though he should risk his own life in consequence ; since he believed their petition a proper one. On the next day, which was the Lord’s Day, he went early to M. de Laudonniere’s house, and requested him, in the name of all the company, to come to the place of public assembly, where he (La Caille) wished to communi-