head, that the work seemed not done by nature, but by art, and had perhaps not its like in the whole Christian world. At leaving this place, our men proceeded to Enecaque, then to Patchica, and then to Choya, where they left the shallops in a small branch of the river with some men as a guard, and made a visit to Outina, who received them most hospitably, and at their departure importuned them so urgently that six of them yielded to his requests, and remained with him ; among them a gentleman named De Groutaut. After remaining there two months, and diligently exploring the country, together with another person whom I had a good while before stationed there for the same purpose, M. de Groutaut returned to the fort, and reported that he had never seen a finer country. Among other accounts, he brought one of a region called Oustaca, which he had seen, whose king was so powerful that he could muster an army of three or four thousand Indians ; to whom it was represented, if I would ally myself, we could together easily conquer all the rest; and, further, this king, I was informed, knew the road to the Apalatcy Mountains, which the French have been so eager to reach, and where the enemy of Oustaca resides ; but that by joining forces we could easily overcome him. This chief sent me a flat piece of brass dug out of the mountains, from whose roots there rises a stream rich in gold, or as the Indians think it, brass. 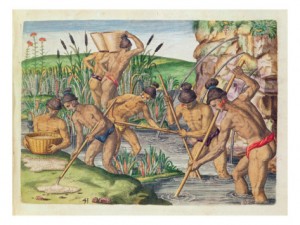 They are accustomed to gather up the sand of this stream into hollow reeds until they are full ; when, by shaking the reeds about, they find grains of gold and silver ; from which they conjecture that there is a vein of the metal within the mountains. Since, however, they were at least five or six days’ journey from the fort at Thracia, I resolved, that, as soon as re-enforcements should reach me from France, I would transfer our establishment to some river farther north, where we should be nearer these mountains.”

To return now to our gentlemen and soldiers who set out for New Spain after provisions. They went to Cuba, where they captured some vessels, in some cases with little difficulty, and laden with supplies of all kinds, such as cassava, olive-oil, and Spanish wine; and they took possession of these ships for their own purposes, leaving their own vessels. Not contented with this booty, they made descents upon several points in the island, carrying off enough plunder, as they reckoned, to come to two thousand crowns apiece. Afterwards they took, though not until after a fight, a swift vessel with great wealth on board, and with her the governor of a certain port in that island called La Havana. This official offered a great sum of money as a ransom for himself and his two children.

The amount was agreed on, but there were required in addition four or six monkeys of the sort called saguins, which are very beautiful, and as many parrots, of which choice ones are found in that island ; and the governor was to remain a prisoner on board the ship until the ransom should be paid. To all this he agreed, and suggested that it would be the quickest way to send one of his children to his wife with a letter explaining the terms. Our Frenchmen read this letter when he had written it, and, not seeing any thing wrong in it, sent it to Havana, as suggested, in the boat of the ship. But, astute and cautious as they thought themselves, they had not heard a few words which the governor managed to whisper into his son’s ear; to wit, that his wife was not to do at all as was set forth in the letter, but was to send post-riders to every port in the island, to summon assistance. So effectively did the lady obey these orders, that at daybreak next morning our ferocious Frenchmen found themselves beset by two large men-of-war, whose broadsides were ready to be opened upon them on either side, and another large vessel besides. Finding themselves thus trapped, as the entrance to the harbor where they lay was narrow, they were greatly cast down ; but six and twenty