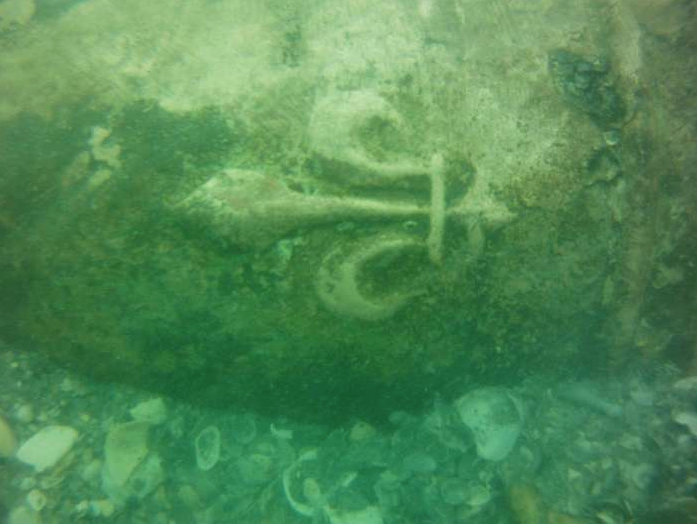 A private treasure salvage company says it’s found a shipwreck, buried in sand under the ocean off Cape Canaveral, that could be linked to the lost French colony of Fort Caroline.

Global Marine Exploration Inc. has discovered scattered evidence of a historic wreck that includes some tantalizing clues: three French bronze cannons, at least one of which has markings from the time of the colony, and a French granite monument adorned with that country’s coat of arms.

The monument is similar to the one French captain Jean Ribault put near the mouth of the St. Johns River in 1562 as he staked his nation’s claim to Florida. Its whereabouts have been a mystery for centuries.

The artifacts remain under the sand until the proper permits can be obtained, so details are sketchy.

GME president and CEO Robert H. Pritchett said he first thought his crews had found one or two of Ribault’s four ships. But he now believes they were Spanish or possibly English merchant vessels; the size of anchors found nearby suggest they were from ships far bigger than Ribault’s, he said.

“It couldn’t have been those (French) ships,” he said.

However, he thinks it’s almost certain that those ships were indeed carrying items from the conquered French fort, taking them to the Spanish outpost in Cuba.

Those items include the granite monument and the cannons. Pritchett said one of the weapons has markings from the reign of French King Henry II, which dates it to the 1547 to 1559.

Though Pritchett doesn’t believe the artifacts came from Ribault’s fleet, others disagree.

The evidence seems clear that GME has indeed found evidence of the French captain’s missing ships, said Chuck Meide, a marine archaeologist, and John de Bry, director of the Center for Historical Archaeology in Melbourne Beach.

“There’s no doubt in my mind,” said Meide. He’s director of the maritime archaeological program at the St. Augustine Lighthouse & Museum and led a 2014 expedition in search of the fleet. “There’s no record of any other ship being lost off of Cape Canaveral in this period.”

De Bry said he believes the wreck is Ribault’s flagship, La Trinite. Accounts from survivors say it sunk in that area, and one survivor said it carried several stone monuments similar to the one placed near Fort Caroline three years earlier.

“No matter how you look at it, it’s possibly the most significant underwater archaeological discovery in North America,” de Bry said.