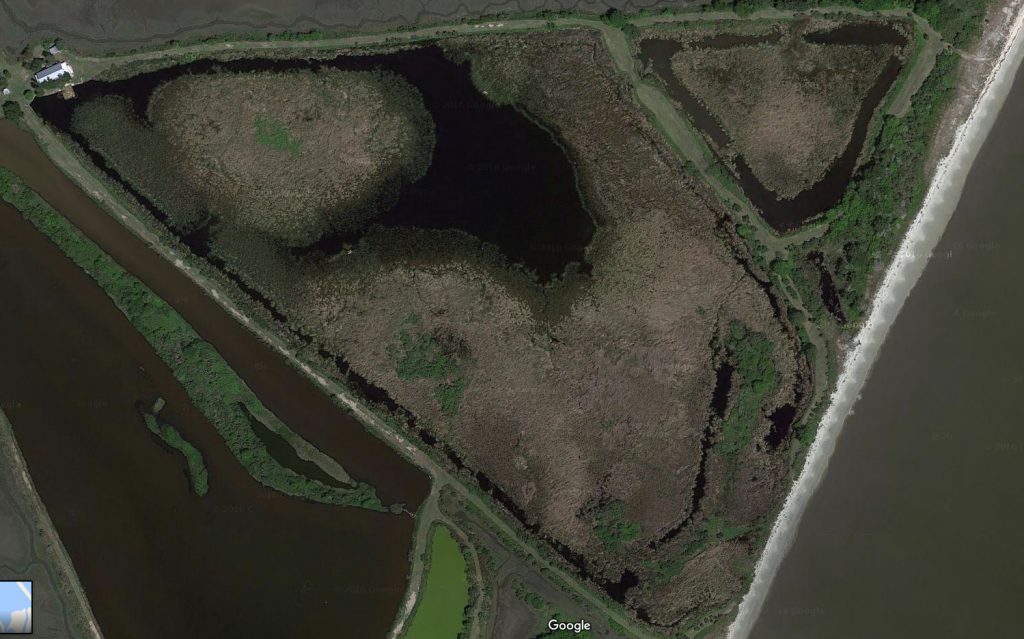 Editors Note: I just stumbled across this old New York Times article from 1993 about the possible rediscovery of the original Fort St. Augustine on the grounds of the Fountain of Youth Park. (Since 1993 they’ve built a reconstruction of a Spanish mission here.) The original fort was constructed by Pedro Menendez in an Indian village named Seloy as part of his defenses against the French at Fort Caroline in 1565. Of course, I’ve argued here and here that this original Fort St. Augustine was actually located in Georgia on Raccoon Key in St. Andrews Sound  (see map below) due to the fact that I also believe the French Fort Caroline was also located in Georgia on the Altamaha River.

The article below also states that the third fort was built on or near the location of the first fort (at the village of Seloy.) The satellite view of the Raccoon Key site does fit with this description. The site features two triangular moats. I believe the smaller triangular moat is the location of the first Fort St. Augustine (also referred to originally as the “entrenchments” and later as “Soloy” in Pedro Menendez’s journals) which was simply the Chief of Seloy’s council house surrounded by a moat. I believe the second triangular moat in the satellite view was the location of the third fort which cleverly utilized the first fort as part of its design. I believe this large moat-enclosed area was a village area needed for the evacuees from the second fort at the Lampedocia site (also referred to as San Agustin Viejo, “Old St. Augustine,” in Pedro Menendez’s journals.)

I believe the fort uncovered in the research reported in the New York Times article below is actually one of the later forts that was constructed after relations with the Seloy Indians deteriorated and the Spanish were forced to move out of their territory. (There were no less than seven Fort St. Augustines built and rebuilt due to Indian attacks and soldier mutinies. I believe the first three were built in Georgia on the Satilla River at the Raccoon Key site and Lampedocia site before they abandoned that locale for present-day St. Augustine, Florida.)

The researchers below suggest the Spanish simply moved a mile away after these Indian attacks but such a short distance would not have protected the Spanish from the Seloy. I believe this is when the Spanish relocated from the Raccoon Key site in modern-day Georgia to the modern-day St. Augustine, Florida site.

ARCHEOLOGISTS have found buried traces of a 16th-century fort in St. Augustine, Fla., and are confident that this establishes for the first time the exact site where the Spanish planted the earliest permanent European settlement in what is now the United States.

Excavations this summer have exposed part of the moat and other artifacts of a structure that archeologists say was almost certainly the first fort built by Pedro Menendez de Aviles in 1565. He arrived that year with 1,500 soldiers and settlers to found the Spanish colony he called St. Augustine, decades before the English established the Virginia Colony at Jamestown in 1607 and the Pilgrims on the Mayflower landed at Plymouth Rock in 1620.

Historians and archeologists of early Spanish colonialism hailed the St. Augustine fort as an exciting and important discovery. “This is the original landing site, sort of the Plymouth Rock of Spanish Florida,” Dr. Kathleen Deagan, an archeologist at the Florida Museum of Natural History in Gainesville and director of the excavations, said in an interview.

Dr. Deagan said she was not sure if these are the remains of the first Menendez fort or of one built soon afterward. But, she added, “We feel confident that we have now finally located the original settlement and associated fort complex of St. Augustine.”

Dr. Stanley South, an archeologist at the University of South Carolina, called it “a very significant find” and described Dr. Deagan as an excellent field archeologist with a reputation for caution in her interpretations. Dr. South has spent years analyzing the remains of Santa Elena, a Spanish colonial settlement founded a year later than St. Augustine at a site now on the Marine Corps base at Parris Island, S.C……..

With the French out of the way, the only obstacle to the Spanish colony would be the Seloy tribe of the Timucuan nation. At first, relations were amicable. The Seloy chief let the Spanish use his long house, a large oval or circular structure with thatch roof that could accommodate up to 300 people.

The Spanish proceeded to fortify the long house, called a bujio, digging a moat around it, throwing up a breastwork of earth and erecting a wooden palisade. In seven months the Indians turned on the Spanish and burned the long-house fort. The fort was rebuilt, and when a relief fleet arrived in the summer of 1566, a more substantial triangular fort was constructed on or near the site of the original fort. That, too, was destroyed, in a troop mutiny in 1570.

It was then that the settlement was moved less than a mile south to the present site of downtown St. Augustine. Other forts were built in the vicinity….