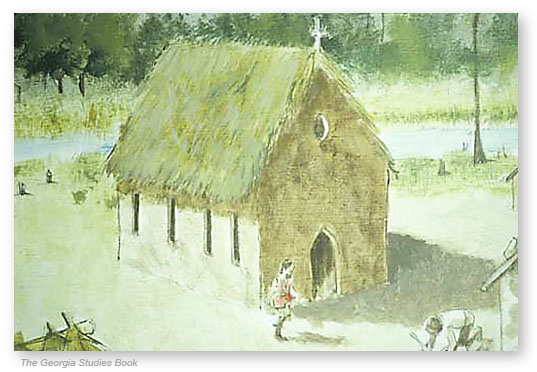 San Miguel de Gualdape was the first European settlement in what would become the continental United States, founded in 1526 by Spanish explorer Lucas Vázquez de Ayllón. The settlers lasted only through three months of winter before abandoning the site in early 1527.

Records show that in 1521, de Ayllón, a wealthy sugar planter of Santo Domingo, had sent Francisco Gordillo northward to explore the continent. Upon reaching the Bahamas, he ran into his cousin, slave trader Pedro de Quexos (Pedro de Quejo), and the two set out together. They landed at the “River of St. John the Baptist”, possibly the Pee Dee River, where they kidnapped 70 natives to sell in Hispaniola. One, whom they named Francisco de Chicora, provided some ethnological information about his province of Chicora, and the neighboring provinces. Chicora was evidently one of several Carolina Siouan-speaking territories subject to their king, Datha of Duahe (also recorded in Spanish as Duarhe). Spanish records described the Siouan captives as white, dressed in skins, and larger than the average Spaniard.

Ayllón obtained a patent from Charles V in 1523. In 1525 he sent Quexos to explore the coastline further. The trader made peace with the natives and explored as far north as the Delaware Bay. He persuaded two natives from each district to return with him to learn Spanish, and thereafter act as interpreters for the colonists.

By mid-July 1526, Ayllón was ready to establish a colony with 600 settlers and 100 horses. He lost one of his three ships at a river he named the Jordan, probably the Santee. The remainder of the expedition landed in Winyah Bay, near present-day Georgetown, South Carolina, on September 29 (the Feast of Archangels). Francisco de Chicora left the group and escaped into the woods. Ayllón’s party proceeded ’40 or 45 leagues’, partly overland and partly by boat, visiting the king of Duahe en route, as related by Peter Martyr. They reached another river, which they named the Gualdape, where they built the mission San Miguel de Gualdape on October 8.

The location of this colony has been disputed by scholars, since the expedition did not relate in which direction they traveled from the Jordan (Santee). Some historians have asserted that Ayllón went North, reaching the Chesapeake Bay. Francisco Fernández de Écija, chief pilot of Spaniards searching the Chesapeake Bay for English activities in 1609, claimed that Ayllón in 1526 had landed on the James somewhere near where Jamestown developed in the future. Ecija also claimed the natives at the Santee had told him Daxe (Duahe) was a town 4 days to the north.

The 20th-century American ethnologist John Swanton, who studied Southeast tribes, suggested Ayllón may have gone ’45 leagues’ to the southwest, and that the Gualdape was the Savannah River in Georgia. There he would have interacted with the Guale tribe. More contemporary American scholars concur that Ayllón probably developed the 1526 settlement at or near present-day Georgia’s Sapelo Island; they believe that scholarly speculation to locate the San Miguel settlement (Tierra de Ayllón) any farther to the north is unsubstantiated conjecture.

The colony was a failure; Ayllón died there, purportedly in the arms of a Dominican friar. His small settlement endured about a total of three months, through a severe winter. Settlers suffered from the scarcity of supplies, hunger, disease, and troubles with the local natives. In the spring of 1527, Francis Gomez returned the 150 survivors to Hispaniola, sailing on two of the original three vessels. One of the two sank, resulting in survivors crowding on one vessel to return.

Ayllón had brought a group of Africans to labor at the mission, to clear ground and erect the buildings. This was the first time that Spanish colonists had used African slaves on the North American continent. During a period of internal political disputes among the settlers, the slaves rebelled. This 1526 incident is the first documented slave rebellion in North America.

Dominican friars Fr. Antonio de Montesinos and Fr. Anthony de Cervantes were among the San Miguel de Gualdape colonists. They would have celebrated mass each day, making this the first place in the present-day United States in which mass was celebrated. The specific location and date of the event are not known.