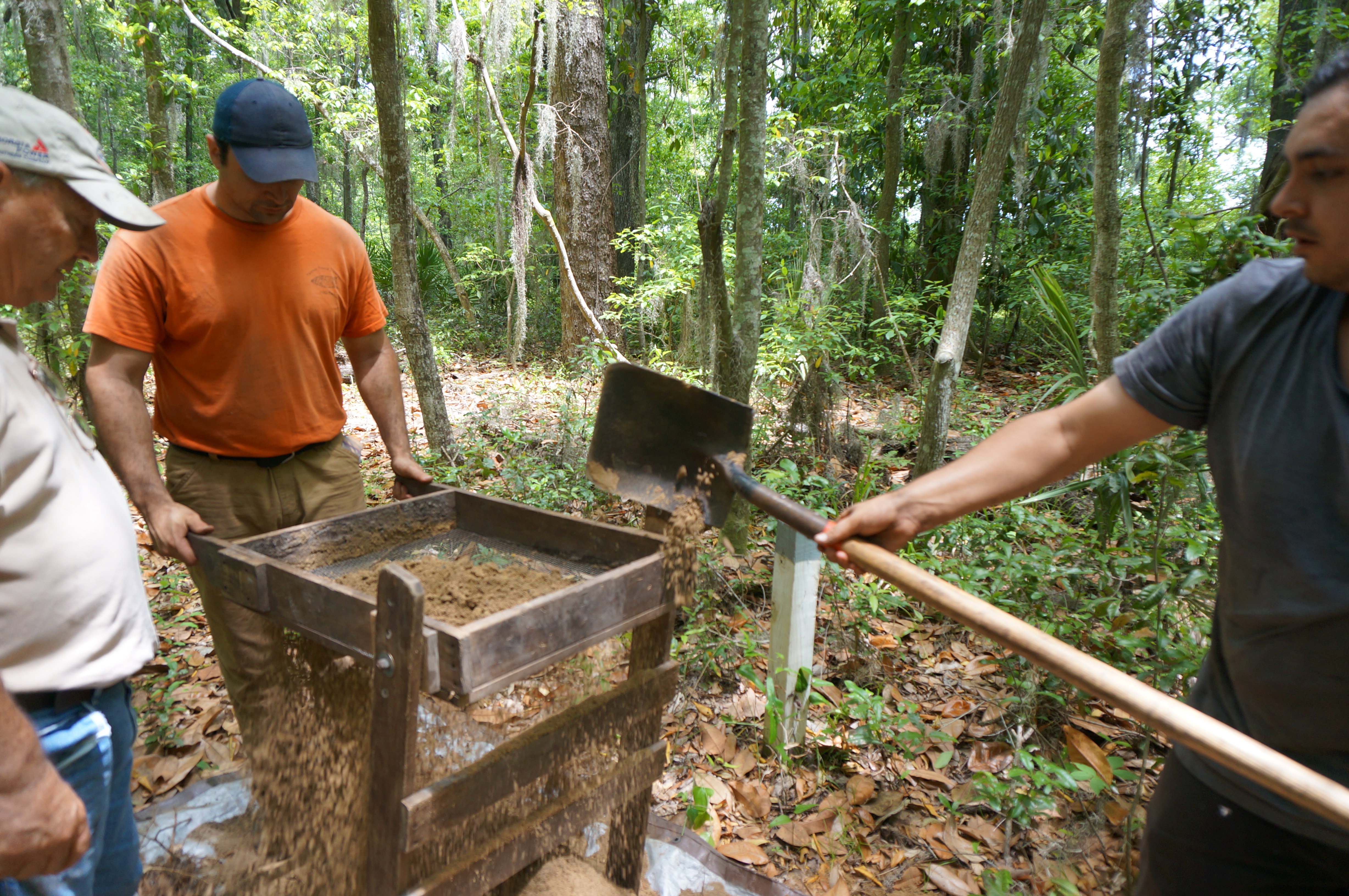 The Fort Caroline Archaeology Project conducting shovel tests at the Evelyn Plantation site in the Spring of 2014. (Photo by Gary C. Daniels)

In the mid 1700s English naturalist William Bartram described visiting the ruins of an old French or Spanish fort along the Altamaha River in Georgia. He described these ruins as a “tetragon terrace” surrounded by a moat. Could these ruins be the remains of the French Fort Caroline later renamed San Matteo by the Spanish and, if so, where exactly are these ruins located?

In the Fall of 1971 a paper was published in the Georgia Historical Quarterly which located Bartram’s tetragon terrace at the site of the Evelyn Plantation in Glynn County, Georgia.  In 2014 I assisted The Fort Caroline Archaeology Project in their search for the lost Fort Caroline at this very site inspired, in part, by this forty-year-old research paper. Unfortunately their limited shovel tests unearthed no evidence of the fort.

For archival purposes I’m posting below an excerpt from the 1971 paper, “Historical Report on Evelyn Plantation” that first postulated that Bartram’s “tetragon terrace” was at this site:

The tabby and brick ruin at Evelyn Plantation, in north Glynn County opposite Darien, Georgia, is the ruin of one of several 19th-century plantation homes which prospered in the decades before the Civil War. In June, 1934, James Ford, an archaeologist working with the Civilian Conservation Corps, observed the ruin and commented: “It was made of stucco, had a cellar, and seems to have been a rather pretentious building….The Evelyn tract is subdivided and lots have been sold to private individuals for homebuilding. Soon the ruin, as well as a number of Indian burial mounds, will be razed….

On October 7, 1763, King George III proclaimed that all lands between the Altamaha River and the St. Marys River to the Mississippi would be included in the Georgia colony. From 1732 to that date the Georgia colony was bounded on the south by the Altamaha River. Also in that year, 1763, Spain ceded East and West Florida to Great Britain, thus ending the status of Georgia as a buffer colony….

There are other features on the Evelyn tract besides the Evelyn house ruins which are historically important, namely, the Indian mounds and a late 18th or early 19th-century homesite. The mounds are particularly important because one of them is the controversial “regular tetragon terrace” which the renowned naturalist William Bartram observed in 1775.

As Bartram swung through the Southeast conducting his nature studies he often made observations of an non-naturalistic sort. When he visited the area along the South branch of the Altamaha River he made the following notation:

“On the west banks of the south channel [of the Altamaha River], ten or twelve miles above its mouth, and nearly opposite Darien, are to be seen, the remains of an ancient fort, or fortification: it is now a regular tetragon terrace, about four feet high, with bastions at each angle; the area may contain about an acre of ground, but the fosse which surrounded it is nearly filled up. There are large Live Oaks, Pines, and other trees, growing upon it, and in the old fields adjoining. It is supposed to have been the work of the French or Spaniards. A large swamp lies betwixt it and the river, and a considerable creek runs close by the works, and enters the river through the swamp, a small distance above Broughton Island.”[38]

Bartram’s notation has been the source of some controversy. According to Marmaduke Floyd it has been confused with the tabby ruins on Elizafield Plantation. It was used to bolster the impression that the tabby ruins at Elizafield as well as tabby ruins along the Georgia coast were Spanish mission ruins. The tabby mission theory was attributed largely to Mary Ross of Brunswick. Miss Ross has repudiated her theory which Floyd proved to be ill-conceived. [39]

Floyd also attempted to prove that Bartram’s “tetragon terrace” was located on Howfyl Plantation which borders Evelyn on the east and not in the Evelyn-Elizafield area. [40] On this point it is necessary to take a fresh look and risk opening anew the controversy.

In the second place, Floyd denied that “a peculiar mound several feet high, near the canal, and about an acre in area” was Bartram’s “tetragon terrace” because there was “no sign of a ‘fosse’” and because “the mound appears of natural origin.”[42] It is quite understandable that there was no fosse when Floyd observed the mound in the 1930’s since 160 years before the fosse was already “nearly filled up,” in Bartram’s words. As for the allegedly natural origin of the mound it seems strange that Floyd came to that conclusion when in the following sentence he conceded that another mound thereby was an Indian burial mound. In any event, archaeologists have indicated that the mound is not of natural origin. It is not clear, however, that the mound was an Indian burial mound.

Floyd maintained that Six Mile Creek is not a “considerable creek.”[43] Again, observation of contemporary maps and aerial photographs show that this creek is as considerable as any in the area. Even the 1801 plat supports the point. Floyd himself admitted that Six Mile Creek was navigable south of the landing place used by the Indians and Dr. Grant, but, he wrote, apparently not much farther south even at high tide.

A fourth point Floyd made in trying to show that Bartram’s terrace is located on Howfyl Plantation is also vulnerable to close scrutiny. He doubted that the “considerable creek” was Six Mile Creek and imagine that the Laurens’ place where Bartram stayed “may have been downstream from the mouth of Dent’s Creek.”[44] Bartram, therefore, would have been referring to Dent’s Creek, which enters into the Howfyl tract, and not Six Mile Creek. There are no facts to prove this highly conjectural but important point. It is interesting that the 1801 plat shows a settlement on Broughton Island slightly upstream from three creeks coming out of the Howfyl tract, one of which is Dent’s Creek. If the settlement was that of Laurens, which it most likely was, Floyd’s conjecture does not hold up.

In contradictory fashion, Floyd tended to destroy his theory of the location of Bartram’s terrace. He stated that “an unusual terrace-like area on Evelyn, upon which are the brick foundations of a large house obviously of the period of the Grant ownership, might have been what Bartram, and later [C. S.] Wylly, referred to.”[45]

In sum, Floyd’s attempt to locate the “tetragon terrace” on Howfyl Plantation does not bear the burden of close scrutiny. Bartram referred to one of the mounds on Evelyn Plantation.

Archaeologist Preston Holder investigated five mounds at Evelyn in 1936. The Evelyn site, as described by Holder, was “a mound site, considting of a low, rectangular platform mound and four small conical burial mounds…” Holder labeled the mounds A, B, C, D, and E. Mound B was desribed as “generically related to the temple mound ‘idea’—a low flat structure with intrusive burials along the edges.”[46] Notes in the Cate Collection at Fort Frederica provide the following additional information on the excavations:

“Site VIB Bartram’s Tetragon Terrace”—the “low, rectangular platform mound”—is located about fifty yards south of the Evelyn house ruins and on the 1969 plat has the designation “I.” The mound is not now an acre in size presumably because of 200 years of erosion. In most other respects it matches the description and location given by Bartram and should therefore be regarded as Bartram’s “tetragon terrace.”

Is the mound the site of “an ancient fort, or fortification…supposed to have been the work of the French or Spaniards?” No conclusive evidence exists to prove that a fort was located there. It is noteworth, however, that in the 1936 investigation a fragment of “wheel turned pot (Sp. Oliver [sic] Jar)” was found on the surface of Mound B, Bartram’s “tetragon terrace.”[48] Realizing the multifarious ways the fragment could have gotten there, the authors make no unequivocal claims. A careful archaeological excavation might solve the mystery.

By now readers have noticed an ostensibly glaring inconsistency in the discussion of Mound B. It will be recalled that Mound B was described, in part, as “a low flat structure with intrusive burials along the edges.” It should be evident, therefore, that the structure must have been a burial mound and not a fort or any sort of non-aboriginal construction.

Information in The Waring Papers: The Southern Cult and Other Archaeological Essays (see footnote 46) from which the description of Mound B comes, does not indicate that the mound was actually investigated to any extent. An attempt to obtain the original manuscript was unsuccessful. It is possible, therefore, that archaeologists merely assumed “intrusive burials along the edges,” a deduction which apparently follows logically from the observation that the mound is “generically related to the temple mound ‘idea.’” The authors find it strange that in the description of the mounds cited above, Mound VIB was not given an anthropological designation for an Indian pottery complex as were the other four mounds. Although information in The Waring Papers indicates that Mound B and Mound C were the two most important mounds on the Evelyn site, it appears that Mound B was not actually wholly or partially excavated. Mound C is thoroughly described in The Waring Papers.

Even if there are “intrusive burials along the edges” would this fact preclude the one-time presence of a Spanish or French structure? Not absolutely, for Spanish churchmen, at least, often built Christian churches or missions on aboriginal religious sites.

There is reason to believe that there were seven mounds on Evelyn Plantation. Of the seven possible mounds three remained intact as of August, 1969, although they were disturbed (mounds I, II, and VII). Mounds III, IV, V, and VI were razed by road-builders.

The final feature of historical interest on the Evelyn tract is a homesite. It is possible that it was built as early as the 1780’s. [49] Evidence of occupation consists of surface finds which include numerous fragments of kaolin pipe stems and bowls, china and glassware. Several interesting, but apparently not unusual examples of pipe stem and bowl fragments were found. One bowl fragment has a bas-relief human profile with the letters “TY” visible on the headband. They were probably the last two letters of “LIBERTY.”

No physical evidence of a dwelling remains aside from a few brick. The 1763 and 1801 plats do not show a dwelling in the immediate vicinity. The “old road to Barrington” on the 1801 plat ran east and west almost over the homesite. It also shows a cabin one-half mile due south. The 1763 plat shows a path 450 yards south of this homesite but does not indicate its direction. It is possible that the cabin in the 1801 plat and the dwelling indicated in the 1969 plat were connected by either the Barrington Road or a path leading from it.

The metabolic process of progress doomed Evelyn and all the Altamaha River plantations to rot and ruin. However, the few physical remains at Evelyn, which testify to its diverse and intriguing history, could be yet preserved.

[47] This information is located in the cabinet drawer labeled “Manuscripts-Typescripts, 1513-1958” in a folder with the heading “1936 Indian Mound Excavations,” Margaret Davis Cate Library, Fort Frederica.

[49] Bill Kelso, former archaeologist for the Georgia Historical Commission, made tentative identifications of some of the surface finds. They belonged roughly in the period from the 1780’s to the 1840’s.