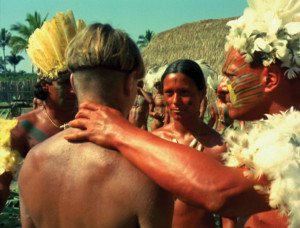 Como Era Gostoso o meu Frances translates into English as How Tasty Was My Little Frenchman. This movie was produced in 1971 about the experiences of a French captive among the Tupi Indians in Brazil. There is strong evidence that there were Tupi immigrants living in coastal Georgia and South Carolina at the time of first European contact. The accounts from survivors of the French Fort Caroline noted a tribe called the Tupi-que lived nearby.  Jerald Milanich from the Florida Museum of Natural History noted in a critique of Le Moyne’s drawings that many of them appeared to depict Tupi headdresses and weapons. He went on to argue that this showed that Le Moyne’s drawings were not accurate depictions of the Indians along the coast of La Florida. Yet this actually provides further proof that the Tupi the French interacted with in Georgia and South Carolina were, in fact, related to the Tupi in Brazil.

If this turns out to be the case then this film provides a very good depiction of what the French interactions with the Tupi of Georgia and South Carolina were like. Watch the full movie here (Warning- contains tribal nudity): https://www.youtube.com/watch?v=MVoP4IxV10w#t=257