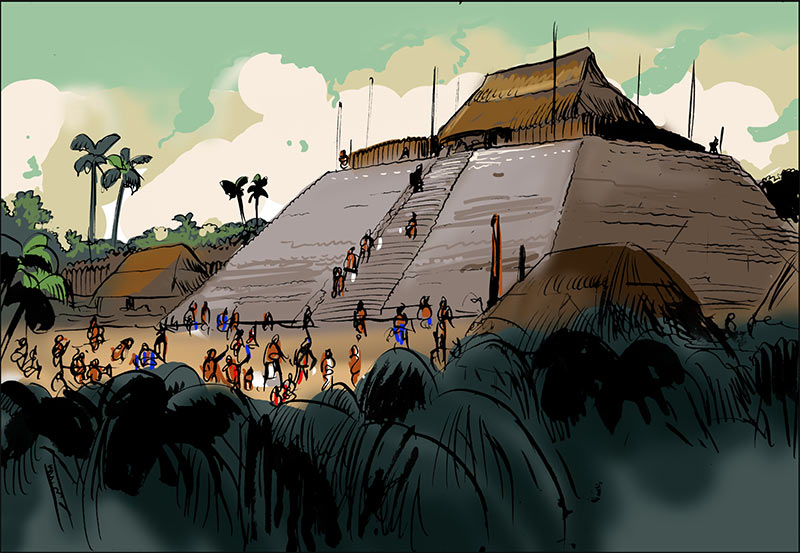 Most large Native American towns featured a large, flat-topped pyramid upon which was the leader’s residence. It always fronted a plaza and the rest of the villagers lived around the plaza according to rank. [Artwork (c)2018 by G.C. Daniels from the book Uleyli: The Princess & Pirate- The True Story of Florida’s Pocahontas.]

Editor’s Note: The Spanish chroniclers of the Hernando de Soto expedition give us the first European eyewitness accounts of the architecture and town planning of Native American villages in Florida in the 1500s. By the time the British arrived two hundred years later, these civilizations were destroyed, their inhabitants dead from warfare and disease, and only vague memories and oral legends remained of the people who built them. Thus these eyewitness accounts offer invaluable insights into what these Native American towns were like at their height.

THE GOVERNOR GOES TO OSACHILE. AN ACCOUNT OF THE MANNER IN WHICH THE INDIANS OF LA FLORIDA ESTABLISH THEIR PUEBLOS

…Therefore it is to be noted that the Indians of La Florida always endeavor to live on a high point, at least in the case of the houses of the caciques and lords when the whole pueblo cannot do so. And because the whole country is very flat, and an elevated site is seldom found that has the other conveniences useful and necessary for a settlement, they make it by their own labor. Amassing a very large quantity of earth, they pack it down by treading on it, raising it up in the form of a hill two or three pike-lengths in height. On top they make a level space large enough for ten, twelve, fifteen, or twenty houses for the dwellings of the lord and his family and the people in his service, in accordance with his ability and the grandeur of his state. On the plain at the foot of the hill, natural or artificial, they make a square plaza corresponding to the size of the pueblo that is to be settled, surrounding which the nobles and chief men build their houses. Then the rest of the common people build theirs, endeavoring not to be too far from the hill where the lord’s house is; they try rather to surround his with their own.

In order to go up to the curaca’s house they make streets straight up the hill, two, three, or more as are needed, fifteen or twenty feet wide. For walls of these streets they drive thick logs into the ground, one after the other, which are sunk into the earth more than an estado deep. [An estado is a unit of measure about the height of an average man.-CS] For stairways they place other logs no less thick at right angles to those that form the walls, and join them together. These logs that form the stairs are planed on all four sides so that the ascent will be smoother. The risers are four, six, or eight feet from one another, according to the incline and steepness of the hill and its height. The horses could ascend and descend them easily because they were broad. All the rest of the hill, besides the stairs, they cut off in the form of a wall so that it is not possible to ascend it, and in this way the lord’s house is better fortified.