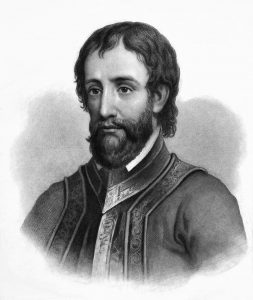 LETTER OF HERNANDO DE SOTO, in Florida,
to the Justice and Board of Magistrates in Santiago de Cuba.

VERY NOBLE GENTLEMEN:
The being in a new country, not very distant indeed from that where you are, still with some sea between, a thousand years appear to me to have gone by since any thing has been heard from you; and although I left some letters written at Havana [his will], to go off in three ways, it is indeed long since I have received one. However, since opportunity offers by which I may send an account of what it is always my duty to give, I will relate what passes, and I believe will be welcome to persons I know favourably, and are earnest for my success.

I took my departure from Havana with all my armament on Sunday, the 18th of May, although I wrote that I should leave on the 25th of the month. I anticipated the day, not to lose a favourable wind, which changed, nevertheless, for calms, upon our getting into the Gulf; still these were not so continuous as to prevent our casting anchor on this coast, as we did at the end of eight days, which was on [the following] Sunday, the festival of Espiritu Santo.

Having fallen four or five leagues below the port, without any one of my pilots being able to tell where we were, it became necessary that I should go in the brigantines and look for it.

In doing so, and in entering the mouth of the port, we were detained three days; and likewise because we had no knowledge of the passage – a bay that runs up a dozen leagues or more from the sea – we were so long delayed that I was obliged to send my Lieutenant-General, Vasco Porcallo de Figueroa, in the brigantines, to take possession of a town at the end of the bay. I ordered all the men and horses to be landed on a beach, whence, with great difficulty, we went on Trinity Sunday [June first, on Full Moon and Spring Tides] to join Vasco Porcallo. The Indians of the coast, because of some fears of us, have abandoned all the country, so that for thirty leagues not a man of them has halted.

At my arrival here I received news of there being a Christian in the possession of a chief, and I sent Baltazar de Gallegos, with 40 men of the horse, and as many of the foot, to endeavour to get him. He found the man a day’s journey from this place, with eight or ten Indians, whom he brought into my power. We rejoiced no little over him, for he speaks the language; and although he had forgotten his own, it directly returned to him. His name is Juan Ortiz, an hidalgo, native of Sevilla.

In consequence of this occurrence, I went myself for the Cacique, and came back with him in peace. I then sent Baltazar de Gallegos, with eighty lancers, and a hundred foot soldiers, to enter the country. He has found fields of maize, beans, and pumpkins, with other fruits, and provision in such quantity as would suffice to subsist a very large army without its knowing a want. Having been allowed, without interruption, to reach the town of a Cacique named Urripacoxit [others say Paricoxi], master of the one we are in, also of many other towns, some Indians were sent to him to treat for peace. This, he writes, having been accomplished, the Cacique failed to keep certain promises, whereupon he seized about 17 persons, among whom are some of the principal men; for in this way, it appears to him, he can best secure a performance. Among those he detains are some old men of authority, as great as can be among such people, who have information of the country farther on.

They say that three days’ journey from where they are, going by some towns and huts, all well inhabited, and having many maize-fields, is a large town called Acuera, where with much convenience we might winter; and that afterwards, farther on, at the distance of two days’ journey, there is another town, called Ocale. It is so large, and they so extol it, that I dare not repeat all that is said. There is to be found in it a great plenty of all the things mentioned; and fowls, a multitude of turkeys, kept in pens, and herds of tame deer that are tended. What this means I do not understand, unless it be the cattle, of which we brought the knowledge with us.

They say there are many trades among that people, and much intercourse, an abundance of gold and silver, and many pearls. May it please God that this may be so; for of what these Indians say I believe nothing but what I see, and must well see; although they know, and have it for a saying, that if they lie to me it will cost them their lives. This interpreter [Juan Ortiz] puts a new life into us, in affording the means of our understanding these people, for without him I know not what would become of us. Glory be to God, who by His goodness has directed all, so that it appears as if He had taken this enterprise in His especial keeping, that it may be for His service, as I have supplicated, and do dedicate it to Him.

I sent eighty soldiers by sea in boats, and my General by land with 40 horsemen, to fall upon a throng of some thousand Indians, or more, whom Juan de Anasco had discovered. The General got back last night, and states that they fled from him; and although he pursued them, they could not be overtaken, for the many obstructions in the way. On our coming together we will march to join Baltazar de Gallegos, that we may go thence to pass the winter at the Ocale, where, if what is said be true, we shall have nothing to desire.

Heaven be pleased that something may come of this that shall be for the service of our Divine Master, and whereby I may be enabled to serve Your Worships, and each of you, as I desire, and is your due.

Notwithstanding my continual occupation here, I am not forgetful of the love I owe to objects at a distance; and since I may not be there in person, I believe that where you, Gentlemen, are, there is little in which my presence can be necessary. This duty weighs upon me more than every other, and for the attentions you will bestow, as befits your goodness, I shall be under great obligations. I enjoin it upon you, to make the utmost exertions to maintain the repose and well-being of the public, with the proper administration of justice, always reposing in the Licentiate, that every thing may be so done in accordance with law, that God and the King may be served, myself gratified, and every one be content and pleased with the performance of his trust, in such a manner as you, Gentlemen, have ever considered for my honour, not less than your own, although I still feel that I have the weight thereof, and bear the responsibility.

As respects the bastion which I left begun, if labouring on it have been neglected, or perhaps discontinued, with the idea that the fabric is not now needed, you, Gentlemen, will favour me by having it finished, since every day brings change; and although no occasion should arise for its employment, the erection is provident for the well-being and safety of the town: an act that will yield me increased satisfaction, through your very noble personages.

That our Lord may guard and increase your prosperity is my wish and your deserving.

In this town and Port of Espiritu Santo, in the Province of Florida, July the 9th, in the year 1539.