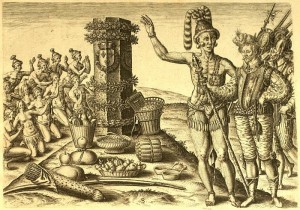 The European exploration of Georgia began only 29 years after the Bahama landfall of Christopher Columbus, when Spanish ships in search of new sources of Indian slaves scoured the Georgia coast in 1521. Following a failed colonial attempt along the coast just five years later, the Georgia interior subsequently witnessed two major military expeditions in 1540 and 1560, followed by a series of smaller entradas between 1597 and 1628. Coastal exploration was renewed under the French in 1562, and continued through the early years of the Florida colony after 1565. Nevertheless, direct contact was not established with some indigenous chiefdoms in Georgia until as late as the mid-17th century, when Spanish visitors and later English traders pushed farther and farther into the colonial frontier.

Mainland bases from which all but the earliest exploratory ventures would be launched were eventually established by both Spanish and English settlers. Spanish Florida’s twin colonial cities of St. Augustine (in present-day Florida) and Santa Elena (once located on Parris Island, South Carolina) were founded in 1565 and 1566, respectively, and explorers departed from both cities during their early years, although Santa Elena was abandoned in 1587 due to the threat of English privateers. The English colony of Virginia was established with the 1607 foundation of Jamestown, which served as the primary English base of operations along the southern frontier until the 1670 foundation of Charles Town (Charleston) and the Carolina colony. Ultimately, St. Augustine and Charles Town would become the primary centers for Spanish-English exploration and colonial expansion during the late 17th and early 18th century.

In broad perspective, Georgia’s landscape was explored by Europeans in four broad phases, described below:

It should be noted here that one tragic though unintentional result of the earliest European exploration in the Southeast was the introduction of European plague diseases such as smallpox and bubonic plague. Southeastern Indians had no innate resistance to these diseases, and when epidemics began during the 16th-century among Indians infected by passing soldiers, they literally devastated indigenous populations. Spreading rapidly beyond the zone of direct European contact (viruses can remain dormant on trade goods, and infected Indians can travel far beyond their point of contact), these epidemics caused rapid and massive demographic collapse among the indigenous chiefdoms of Georgia and the rest of the Southeast. Available records leave little doubt that population levels dropped by more than 90% in many areas within the first two centuries after initial European contact. These overwhelming losses caused immediate and permanent transformations in the social geography of the Southeast, resulting in the total abandonment of many areas, and the collapse of ancient chiefdoms based on tributary labor and foodstuffs. Archaeological evidence indicates that platform mound construction, a secondary indicator of the existence of substantial chiefdoms with stable hereditary leadership, completely ceased in Georgia and surrounding states by around A.D. 1600. European plagues ultimately did far more than any direct hostile action to devastate Georgia’s indigenous societies.

3 thoughts on “European Exploration of Georgia”