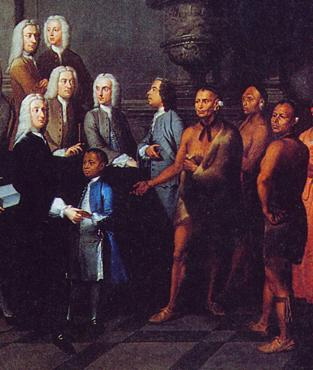 Serious English colonial competition for mainland North America did not begin until the 1607 establishment of Jamestown and the Virginia colony (Raleigh’s colony at Roanoke in the 1580s was a failure). Although permanent Spanish occupation in St. Augustine predated Jamestown by 42 years (some two generations), the early success and growth of Virginia ultimately exerted competetive pressure on the Florida colony. By the time of the foundation of Charles Town and the Carolina colony in 1670, Spanish Florida was already in active retreat from English aggression, and by the end of 1706 the once-expansive Spanish mission system (effectively constituting Spain’s only direct control of the coastlines and interior around St. Augustine) had been reduced to ashes by direct English assault. The region now called Georgia ultimately became an early battleground for English-Spanish colonial border wars, and was transformed into a sparsely-populated buffer-zone by the time of Oglethorpe’s arrival in 1733.

In broad view, the English and Spanish colonial strategies in the southeastern borderlands differed significantly, and these differences ultimately contributed to the downfall of Spanish Florida to English control. Whereas the Spanish endeaored to assimilate indigenous chiefdoms into their expanding colonial realm as tributary provinces, incorporating converted Indian leaders as subordinate bureaucrats within an economic system based on the appropriation of surplus human labor and agricultural staples, the English colonists generally kept neighboring Indian societies at arm’s length, preferring to engage allied groups in profitable trade, supplying them with plentiful firearms and munitions toward this end. As described by the English themselves, the principal objects of the Indian trade were “skins, furrs, slaves, and other vendible commodities.”

Without any question, the most insidious (and successful) component of late 17th- and early 18th-century English colonial expansion was the Indian slave trade. Using allied Indian groups such as the Creek, Cherokee, Chicasaw, and others, the English armed their own partisans in order to conduct raids against unallied or enemy groups (particularly those under Spanish or French control) and capture living Indians for enslavement and sale to English traders. Early 18th-century Carolina records contain an abundance of references to the purchase and sale of Indian slaves, and regulatory codes governing the slave trade consistently make note of the official government policy of protecting English-allied Indians from enslavement (explicitly leaving unallied Indians free for the taking). Adult Indian males were specifically excluded from purchase, and young boys, girls, and adult women were branded to mark their ownership. For this purpose, iron brands were routinely dispatched to traders among the Cherokees and others in order to “mark all skins, furrs, and slaves bought.” Despite the cruelties of this early commerce, English explorer and trader Thomas Nairne commented in 1708 regarding the Indian slave trade that “it is a more effectuall way of civilising and instructing than all the efforts used by the French missionaries” (English-allied Creeks had destroyed the last frontier Spanish missions in 1706, leaving only the French far to the west).

During the decades around the turn of the 18th century, surviving Georgia Indians thus had only two choices — ally themselves with the English as slave-raiders and deer hunters, or seek the protection of the Spanish missions in hopes of avoiding capture and sale as slaves. Flight and isolation was not a viable option; by 1708, Nairne reported that Creek and Chickasaw slavers were forced to raid all the way down to the Florida Keys in order to find fresh victims, since the entire Florida peninsula (apart from the refugee missions around St. Augustine) had been completely depopulated by slaving. Survival in what is now the state of Georgia during the early 18th century meant becoming a voluntary paricipant in the Carolina slave trade. Following the final Spanish evacuation from the Georgia coast in 1684, and from western Georgia in 1691, the only major surviving Indian groups in Georgia were the Creek and Cherokee (along with smaller groups such as the Yamassee and immigrant Savannah), and all of these groups acted as slave-raiders for the English. Only when there were too few Indians left to be captured did the deerskin trade finally replace the Indian slave trade.

The chronology below lists key dates in the English conquest of Spanish Georgia, including not only those events that occurred directly within the state, but also other events that had significant bearing on the eventual creation of the Carolina-Florida buffer-zone, which James Oglethorpe ultimately settled and fortified as the colony of Georgia. As should be obvious, the famous 1742 “Battle of Bloody Marsh” only served as the capstone in an extended military campaign that had lasted nearly a century.

One thought on “English Conquest of Georgia”